Posted on 26 November 2011 by danmillerinpanama

The unmitigated horror of it.

Herman Cain has been catching some flack because, in a Cuban restaurant in Miami, he asked how to say “delicious” in Cuban. Doesn’t the cretin know they speak Spanish in Cuba? Sheesh! Maybe Mr. Cain thought Cuba was in Asia. Nope, that was Hawaii, (one of the fifty-seven states) and it was some other guy.

But it’s not that simple. Would you, in New Hampshire, use the Texan phrase “big hat and no cattle” to describe a guy with lots of silly ideas but no substance? English is spoken in the United States; how does one say “delicious” in rap-talk or Ebonics?

When I studied a bit of Spanish in Cartagena, Colombia I discovered that there are idioms peculiar even to one city, Cartagena. My instructor gave me a slang expression to fend off, inoffensively, street vendors: “estoy mandao.” I haven’t been able to find it in my Spanish-English dictionary and perhaps my spelling is a bit off, but I understand that literally it means, “I’ve been castrated.” However, in the context of dealing with pesky street vendors attempting to vend it means, “I don’t have any money.” I used it a couple of times in Cartagena — pointing at some bags my wife and I were carrying — and it worked. 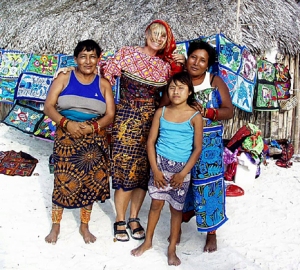 Here in Panamá, there are indigenous people who speak various native languages rather than Spanish. The Kuna Indians living in the San Blas Islands do so and many of the older women don’t speak Spanish. Here’s a photo of my wife posing with some Kuna women trying to sell molas. Even when speaking with a Kuna fluent in Spanish, throwing in a phrase in the Kuna language was well received.

I was graduated from Yale University in 1963 with a B.A. in economics and from the University of Virginia School of law, where I was the notes editor of the Virginia Law Review in 1966. Following four years of active duty with the Army JAG Corps, with two tours in Korea, I entered private practice in Washington, D.C. specializing in communications law. I retired in 1996 to sail with my wife, Jeanie, on our sailboat Namaste to and in the Caribbean. In 2002, we settled in the Republic of Panama and live in a very rural area up in the mountains. I have contributed to Pajamas Media and Pajamas Tatler. In addition to my own blog, Dan Miller in Panama, I an an editor of Warsclerotic and contribute to China Daily Mail when I have something to write about North Korea.
View all posts by danmillerinpanama →
This entry was posted in Cain, Cuban, Spanish. Bookmark the permalink.