The Librul* war on Fact and Science

Posted on 7 April 2012 by danmillerinpanama

Wars have long been waged in many ways.  New ways were developed so that we could have wars on street drugs, on poverty, on obesity and on other perceived ills because traditional weapons such as bombs, guns, spears and knives did not work very well; there was an exception: smoke. Smoke is an old but still grand and glorious weapon when used against perceived but not necessarily violent evils.

Smoke can obstruct vision by causing eyes to water, by producing hallucinations or simply by creating a haze. There is another form of smoke, called “fashion.”  St. Al the Gored, a.k.a. the Librul* Science Defender (LSD), and his disciples have used all four to demonstrate the calamitous consequences of anthropogenic climate change.

polar bears marooned on small and sinking bits of ice.  However, the populations are growing:

The number of bears along the western shore of Hudson Bay, believed to be among the most threatened bear subpopulations, stands at 1,013 and could be even higher, according to the results of an aerial survey released Wednesday by the Government of Nunavut. That’s 66 per cent higher than estimates by other researchers who forecasted the numbers would fall to as low as 610 because of warming temperatures that melt ice faster and ruin bears’ ability to hunt. The Hudson Bay region, which straddles Nunavut and Manitoba, is critical because it’s considered a bellwether for how polar bears are doing elsewhere in the Arctic. 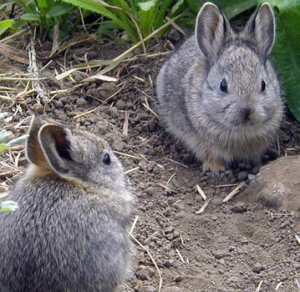 But aren't they made of chocolate?

Similar tears have been shed for cute Easter Bunnies and other critters forced from safety and to adapt, often with some success, to new habitats — perhaps more readily than we can adapt to “renewable” energy in place of fossil fuels.

Glaciers don’t adapt very well.  Many that have melted — or at least that should have melted — and raised sea levels substantially — have not.

After the “Himalayagate” scandal . . . . the United Nations science body the Intergovernmental Panel on Climate Change (IPCC) [was] forced to admit it was a mistake to predict the Himalayan glaciers would melt by 2035.

“The contribution of glaciers and ice caps (excluding the Antarctica and Greenland peripheral GICs) to sea-level rise was less than half the value of the most recent, comprehensive estimate obtained from extrapolation of in situ measurements for 2001-05 (0.41 +/- 0.08 compared with 1.1mm yr). Second, losses for the High Mountain Asia region – comprising the Himalayas, Karakoram, Tianshan, Pamirs and Tibet – were insignificant.”

“Facts and figures” that “cannot lie” have been made so warm and fuzzy that they can be, and often have been, used to prove whatever might be desired.

Visualize a scenario where all of the evidence that President Obama (a) was and (b) was not born in the United States is assembled and a different scenario where all of the evidence that global warming (a) is and (b) is not in large part man made is assembled. Then have both sets of evidence analyzed, using objective rather than faux-scientific or faith-based methods, to determine whether (a) or (b) is more nearly correct within its respective set. Which, of (a) and (b) of each set, would be thought, objectively, the more conclusively demonstrated and which to be lacking sufficient evidence? Within each set, it is possible for both (a) and (b) to be insufficiently demonstrated, but not for both (a) and (b) to be demonstrated to be correct. The answers to these questions may not matter much, because belief is far more widely relied upon than is anything approaching objective analysis in answering both questions.

I pose these questions in part because of insights into why people “believe” some things and disbelieve others.  Barry Rubin at PJ Media opines in the linked article,

How do you turn “the smartest people in the world” into the dumbest? Simple: you turn the sophisticated sources of information on which they depend — elite media, academia, and schools — into sources of misinformation.

And how do you persuade people who should know better to embrace bad ideas and silly concepts? Equally simple.

You make those ideas fashionable.

There is wisdom in that intuitive observation. Belief in man made global warming is fashionable and disbelief is unfashionable. Belief in President Obama’s presidential eligibility is fashionable, “birtherism” is unfashionable.  At a properly fashionable cocktail  party, perhaps in Washington, D.C., try this experiment: deny — or merely express skepticism — that there is global warming or that man is its principal cause. Deny — or merely express skepticism — that President Obama is constitutionally qualified under Article II of the Constitution as a “natural born citizen.” This too should perhaps just be a thought experiment for anyone desiring to be invited again.

Indeed, fashion may be the greatest enemy of survival for America today. Holding a certain set of ideas has been defined as making one seem sophisticated, successful, and admirable. Other ideas are deemed horrible, indicating that the person is a hick, rube, bumpkin, yahoo, racist. In short, the kind of person who hates others because they are different and clings to guns and religion.

One of the great successes of leftism (pretending to be liberalism) in North America and Europe today is that it has made itself so fashionable, so identified with sophistication, intellectual quality, and what used to be called the upper class. Not the old upper class of country clubs and yachts (though Senator John Kerry has a whopper of a boat), but the upper class of merit, the truly good who hate racism and are saving the Earth.

Racism is very bad and saving the Earth would be great if it needed saving and if we are able to do it. The problems come in identifying what is racism and to what extent the Earth needs saving from the things that man does that cause global warming. The Reverend Messrs Sharpton and Jackson, despite their Librul* allies and strong rhetoric, don’t have the necessarily correct answers to what is racism or how to deal with it, and neither do members of the St. Al clique to whether global warming is man made or, if so, what should be done about it.

I was graduated from Yale University in 1963 with a B.A. in economics and from the University of Virginia School of law, where I was the notes editor of the Virginia Law Review in 1966. Following four years of active duty with the Army JAG Corps, with two tours in Korea, I entered private practice in Washington, D.C. specializing in communications law. I retired in 1996 to sail with my wife, Jeanie, on our sailboat Namaste to and in the Caribbean. In 2002, we settled in the Republic of Panama and live in a very rural area up in the mountains. I have contributed to Pajamas Media and Pajamas Tatler. In addition to my own blog, Dan Miller in Panama, I an an editor of Warsclerotic and contribute to China Daily Mail when I have something to write about North Korea.
View all posts by danmillerinpanama →
This entry was posted in Belief, Birthers, Church of Global Warming, Constitution, Criticism sessions, Culture, Dep't of Information, Facts, Fashion, History, Ideology, Media, Obama, Opinion, Political Correctness, Racism, Religion, Society, United States and tagged current-events, environment, politics, science. Bookmark the permalink.

11 Responses to The Librul* war on Fact and Science