Posted on 9 May 2012 by danmillerinpanama

It is a proven technology and has many untapped potentials.

Wind power has been used successfully for many years; it may predate the employment of galley slaves (those who row,  probably not those who cook in the galley). Even now, wind power has important uses.  It makes sailing, correctly known as the most expensive means of third class travel ever devised, possible. It also provides independence when sailing upon oceans, notoriously deficient in refueling stations. During seven years of sailing the Caribbean Sea my wife and I encountered not even one offshore gasoline station where diesel fuel for our auxiliary engine could be purchased. The wind, however, was free and (almost) ever present. True, on rare occasions it failed to oblige and came from what we could have deemed a wrong direction.  However, the wind in the Caribbean blows fairly consistently from the east at ten to fifteen knots, so traveling north, west, or south — or even east-north-east or east-south-east — was pleasant.  In fact, the fastest point of sail, and generally the most comfortable, is with the wind from forty-five to sixty degrees off either bow (but not both simultaneously or in rapid succession). We generally sailed in a direction favored by the winds and eventually got where we had hoped to arrive in reasonable comfort. Beating close hauled into a twenty-five knot wind and ten foot seas in a small boat such as ours could be uncomfortable. 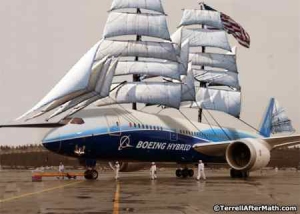 Wind power does have drawbacks when in a hurry. Although possibly fun, gliders are impractical for those obsessed with arriving on time at perversely chosen destinations. Wind power could, possibly, be tried for Air Force One but seems unlikely to be satisfactory for a president preoccupied with important matters of state, such as campaigning for reelection, and therefore unwilling to go just anywhere the winds might eventually take him. For some current and even former presidents who will not be identified, that might be a patriotic choice; it is therefore doubly unlikely to be made.

Wind power has many appropriate uses even on dry land.  Windmills, for example, have been known to grind grain successfully as well as to provide fruitful targets for lances and hence for frustrations. Much of the frustration now endured due to the paucity of windmills would be assuaged were there many more. This could also encourage equestrianism and thereby stimulate employment in such critical fields as blacksmithery, stable management and veterinary medicine. In similar fashion, the widespread obesity that now plagues the world could be alleviated.

When used to produce electricity, land based modern windmills can also provide useful byproducts such as localized heating, soothing sounds and dead birds. The possibilities of recreational-use franchises to generate funds to reduce the cost of the generating electricity have not been explored adequately. On days when the ambient temperature is uncomfortably low, vast flocks of humans could enjoy napping in pleasantly warmed environments and then collecting bird remains to be cooked over solar ovens for late evening meals. The beneficiaries would be warmed, rested and well fed and the birds would die happily knowing that mere wild scavengers would not eat them raw. Since no other means of generating electricity can yield these important benefits, the high financial costs of constructing and maintaining such facilities should not even be considered.

It is to be hoped that advocates of sustainability and its cousin, green energy, will soon become more forceful in their advocacy of the wind power benefits summarized above; there are few others. Ways must be found to associate these benefits with offshore windmills so that they too can be competitive, at least with offshore coal and nuclear generating facilities.

I was graduated from Yale University in 1963 with a B.A. in economics and from the University of Virginia School of law, where I was the notes editor of the Virginia Law Review in 1966. Following four years of active duty with the Army JAG Corps, with two tours in Korea, I entered private practice in Washington, D.C. specializing in communications law. I retired in 1996 to sail with my wife, Jeanie, on our sailboat Namaste to and in the Caribbean. In 2002, we settled in the Republic of Panama and live in a very rural area up in the mountains. I have contributed to Pajamas Media and Pajamas Tatler. In addition to my own blog, Dan Miller in Panama, I an an editor of Warsclerotic and contribute to China Daily Mail when I have something to write about North Korea.
View all posts by danmillerinpanama →
This entry was posted in Abuse of Power, Air travel, Cruising, Laura Dekker, Olden Days, Satire, Teenager sails solo aroung the world, the Basics, travel, Weather, Windmills and tagged environment, science, transportation, travel. Bookmark the permalink.

7 Responses to Wind power is awesome.