Posted on 28 June 2012 by danmillerinpanama

BUT unexpectedly upholds ObamaCare 5:4 as permissible under the taxing authority granted to the Congress by the Constitution. Chief Justice Roberts sided with the librul wing of the Court and wrote the majority opinion. Justices Kennedy, Thomas, Scalia and Alito dissented,
opining that the entire law should be struck down. 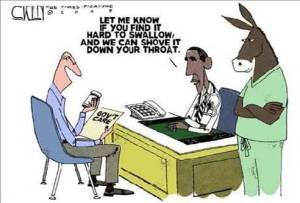 In rejecting the Commerce Clause as a proper predicate for the Individual Mandate, the majority held that

The individual mandate . . . does not regulate existing commercial activity. It instead compels individuals to become active in commerce by purchasing a product, on the ground that their failure to do so affects interstate commerce. Construing the Commerce Clause to permit Congress to regulate individuals precisely because they are doing nothing would open a new and potentially vast domain to congressional authority. Every day individuals do not do an infinite number of things. In some cases they decide not to do something; in others they simply fail to do it. Allowing Congress to justify federal regulation by pointing to the effect of inaction on commerce would bring countless decisions an individual could potentially make within the scope of federal regulation, and—under the Government’s theory—empower Congress to make those decisions for him.

Just as the individual mandate cannot be sustained as a law regulating the substantial effects of the failure to purchase health insurance, neither can it be upheld as a “necessary and proper” component of the insurance reforms. The commerce power thus does not authorize the mandate.

The basis for nevertheless upholding ObamaCare is that the penalty to be imposed is in the nature of a “tax,” even though the Congress had rejected its initial characterization as a tax and in later drafts called it a “penalty” because it would have been politically inconvenient to call it a tax. The Anti-Injunction Act prohibits attacks on a tax before it is actually imposed and the “tax” does not go into effect until 2014. This rationale had often been rejected by the lower courts and as I recall had not been argued seriously by Government counsel during oral argument before the Supreme Court. The majority did not rely on the Anti-Injunction Act, stating

Proceeding to the merits, Justice Roberts stated for the majority,

The Government’s tax power argument asks us to view the statute differently than we did in considering its commerce power theory. In making its Commerce Clause argument, the Government defended the mandate as a regulation requiring individuals to purchase health insurance. The Government does not claim that the taxing power allows Congress to issue such a command. Instead, the Government asks us to read the mandate not as ordering individuals to buy insurance, but rather as imposing a tax on those who do not buy that product.

I shall now refer to my horse as a cow and try to milk him . . . . . The results were “unexpectedly” unfortunate for both of us. Now, continuing with Chief Justice Roberts’ majority opinion,

Under the mandate, if an individual does not maintain health insurance, the only consequence is that he must make an additional payment to the IRS when he pays his taxes. See §5000A(b). That, according to the Government, means the mandate can be regarded as establishing a condition—not owning health insurance—that triggers a tax—the required payment to the IRS. Under that theory, the mandate is not a legal command to buy insurance. Rather, it makes going without insurance just another thing the Government taxes, like buying gasoline or earning income. And if the mandate is in effect just a tax hike on certain taxpayers who do not have health insurance, it may be within Congress’s constitutional power to tax.

The question is not whether that is the most natural interpretation of the mandate, but only whether it is a “fairly possible” one.  As we have explained, “every reasonable construction must be resorted to, in order to save a statute from unconstitutionality.”The Government asks us to interpret the mandate as imposing a tax, if it would otherwise violate the Constitution. Granting the Act the full measure of deference owed to federal statutes, it can be so read, for the reasons set forth below.

The Affordable Care Act’s requirement that certain individuals pay a financial penalty for not obtaining health insurance may reasonably be characterized as a tax. Because the Constitution permits such a tax, it is not our role to forbid it, or to pass upon its wisdom or fairness. (Emphasis added, internal citations omitted.)

My preliminary reaction is that Chief Justice Roberts’ majority opinion is contrived nonsense; my horse indicated that he agrees with my preliminary assessment. 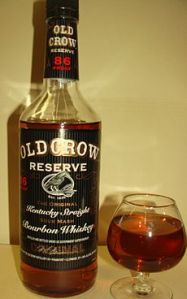 I’ll have to think about it.

I may possibly change my mind after I have read his decision more carefully. I have not yet read the entire 193 pages of the decision, multiple separate opinions/concurring opinions and dissents released and posted at the Supreme Court’s website shortly after 10:00 a.m., EDT. My internet service went down very early this morning and I could not access the document until about 11:30 a.m. EDT. I have thus far done little more than skim Chief Justice Robert’s majority opinion. When I have studied it and the other opinions, I shall try to post a more analytical article. I had hoped to do so later today but it will probably take me longer than that. It’s a $#@@^%# mess.

For now, rather than attempt to dissect the lightning-fast gurgitations and regurgitations of others who have not yet studied the multiple Court pronouncements either, here are a few of my own thoughts rather briefly, based on merely skimming the decision and my own analyses of earlier ObamaCare decisions by Federal courts of appeal presented here, here, here and elsewhere.

It seems to be a good thing that the Court at least held the individual mandate beyond the authority of the Federal Government under the Commerce Clause of Article I, Section 8 of the Constitution. That was apparently the clause relied upon in enacting ObamaCare and thereafter by the Obama Administration principally in defending it. In rejecting the Commerce Clause as a proper basis for giving the Congress authority for the insurance mandate, the Court appears to have declined further to engorge at least that section (beyond what it had previously done) to authorize the Federal Government to require the purchase of goods and services by individuals not in the market for them. To have expanded it in that fashion would have eliminated all rational bases for future judicial determinations of whether Congress had gone too far beyond the pale under the Commerce Clause. It would also have refused guidance to Congress on that matter. That part of today’s decision had been widely anticipated, at least after the oral arguments held on March 26 – 27. To what extent that part of the ruling may have any practical effect on future purchase mandates depends on further analysis of what the Court said about the taxing powers of the Congress and on how what it said may be interpreted hereafter. 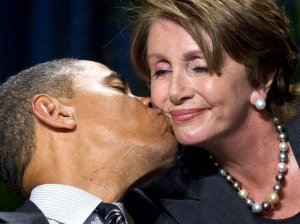 Thanks, sweetie! You done GOOD!

As to the other major parts ObamaCare, they of course still stand.

There had been much speculation and less certainty as to what the Court would do about the many sections of the approximately two thousand page law thought to be dependent upon the mandate. Last October, I suggested here that the most likely and worst possible result for President Obama would be for the Court to reject the mandate while leaving the balance of the law standing without the necessary financial support provided by the mandate. I saw that as doing the most to put ObamaCare directly before the public, in the worst possible light, during the presidential campaign. There seemed to be little that President Obama could do to make his “signature legislation” work without the mandate and that he would thus have to campaign for reelection with the ObamaCare cadaver hanging from his neck. On the other hand, the Court’s decision leaves the question of what the Congress should and should not do in the future about ObamaCare an issue may still be important to the campaign.

In any event, with the majority ruling 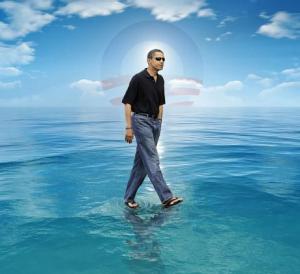 President Obama won’t need to find another ocean to walk upon. Now, we can probably expect yet another begging letter from the Obama-Biden campaign, this one asking for support so that he can continue to do “what is right.”

I hope to be back later with further analyses after I have studied the decision and the various separate opinions and dissents.

I was graduated from Yale University in 1963 with a B.A. in economics and from the University of Virginia School of law, where I was the notes editor of the Virginia Law Review in 1966. Following four years of active duty with the Army JAG Corps, with two tours in Korea, I entered private practice in Washington, D.C. specializing in communications law. I retired in 1996 to sail with my wife, Jeanie, on our sailboat Namaste to and in the Caribbean. In 2002, we settled in the Republic of Panama and live in a very rural area up in the mountains. I have contributed to Pajamas Media and Pajamas Tatler. In addition to my own blog, Dan Miller in Panama, I an an editor of Warsclerotic and contribute to China Daily Mail when I have something to write about North Korea.
View all posts by danmillerinpanama →
This entry was posted in Abuse of Power, Administrative Agencies, Border closings, Commerce Clause, Congress, Constitution, Courts, Democrats, Deportation, Discrimination, Elections, Facts, Federal Agencies, Government and individual choices, Health Control, Hispanic, Holder, Judges, Justice, Justices, la Raza, Law, Law and Order, Limitation on Authority, New Deal, Obama, ObamaCare, Opinion, Political class, Politics, Racism, Regulations, Republicans, Socialism, States' Rights, Supreme Court, Taxing powers, the Basics, United States, White House and tagged commerce power, justice roberts, politics. Bookmark the permalink.