Posted on 20 July 2012 by danmillerinpanama

In an earlier article The Really Honorable I. M. Totus, then the Teleprompter of the United States, told us of his origins and White House functions. Recently fired from his post, he now has even more to say.

President Obama’s  glory days with me

With the exceptions noted in my earlier guest post here, I generally expressed happiness mingled with fatherly concern over President Obama’s speechifying. During public appearances, I was nearly always beside him telling him what to say and how to act while saying it.  On a few sad occasions, a less competent teleprompter displaced me and the results were unfortunate. Still, I always tried my best; putting aside false modesty, I did a remarkable job.

During President Obama’s “If you’ve got a business — you didn’t build that. Somebody else made that happen” address in Roanoke, Virginia last weekend, I was not present to help him because I had been fired — possibly because of the candid remarks in my earlier blog post here. Due in large part to my absence, President Obama had a very bad week and his Roanoke Address was the worst of it. Had I been there, I would not have directed him to say such things. If he had started to do so on his own, I would have found some way to distract or if necessary even to throttle him before he got those words out. They immediately became the defining moment of the campaign.

It’s as if President Obama climbed into a tank, put on his helmet, talked about how his foray into Cambodia was seared in his memory, looked at his watch, misspelled “potato” and pardoned Richard Nixon all in the same day. It’s fun to imagine the hand-wringing that must be going on within the White House as staffers try to figure out how to undo the damage their boss has done with his anti-entrepenurial riff. Defining moments in politics are strange beasts. Sometimes they’re only recognized in hindsight, while sometimes they throw the train off the tracks before a sentence has been completed. Sometimes their effect can be contained and minimized, while sometimes their effect on the political narrative mestastasizes. This one is very bad for the White House.

Hand-wringing at the White House indeed! Those hands should be wringing the necks of the traitorous racist right-wing conspirators who fired me. But I hold no grudges. I want only the best for our beloved but all too often misguided and therefore misunderstood President, whom I served to the best of my incredible abilities as long as I was permitted to do so. 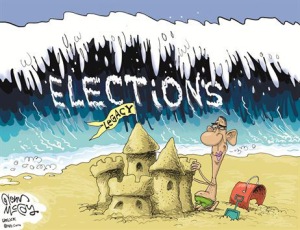 Now, President Obama is trying to walk back his “defining moment.” His words can’t be walked back, any more than a tsunami can be persuaded retroactively not to happen.  President Obama’s opponent, a Mormon reactionary, was quick to jump gleefully upon his remarks with a campaign ad.  Although it probably relied on union-busting actors and other filthy rich people to play their parts like mindless robots, the vile and untruthful piece of slime seems likely to harm President Obama anyway. He may well win the election.

Since I am no longer permitted to serve my President, he desperately needs another teleprompter, certainly brighter and more savvy than he is, to keep him on the straight and narrow path toward the historic reelection victory he so badly deserves. Perhaps my earlier post here was prophetic:

President Obama needs me, The TOTUS, and has done very, very well with my humble help. Were I not permitted thus to serve him, he could not win the coming election — no matter how unpatriotic and otherwise inferior might be his opponent’s teleprompter.

This great truth was amply demonstrated during President Obama’s recent “defining moment” — he had no teleprompter upon which to rely and instead spoke from handwritten notes, presumably his own.

Obama pulled a folded sheet of paper out of his front shirt pocket at the beginning of his speech, and slowly unfolded it. Throughout the speech, Obama glances down at his sheet of paper, rather than the usual mechanical side-to-side head turns from screen to screen.

Wide-angle photos of the event show no sign of the familiar twin-screens that typically follow Obama everywhere. Instead, a white sheet of paper is seen at the podium.

According to a senior administration official, who spoke to the Hill, the missing teleprompters at recent campaign events are part of a strategy that is “less to do with image and more to do with upping the tempo” at campaign events, creating more unscripted moments.

With no teleprompter, President Obama was certainly “upping the tempo” with “unscripted moments,” much to his and his supporters’ chagrin — matched only by his opponent’s delight. Maybe he was trying to gain support based on fond memories of President

Lincoln’s Gettysburg Address, delivered from notes made on the back of an envelope during a train ride. Perhaps he hoped that the notes for his Roanoke Address would become as important to his historic legacy as President Lincoln’s Gettysburg Address notes — as indeed they probably will, unfortunately. I don’t know whether, or if so what, he may have been thinking. I am no longer privy to his thoughts. Indeed, it is not really the President’s job to think. That’s what we teleprompters are for.

Nevertheless, if that’s what he was thinking he should, like President Lincoln, have taken a train rather than his customary means of transport to the venue for his address. Riding on a train might have taken more time, and that’s the one precious commodity he can’t afford to waste. Unlike tax revenues and campaign contributions, there’s no more time where that already wasted came from.  With all he has on his plate, he needs all the time he can create or save for his fund raising ventures and campaign speeches. Still, since he must have known that there would be no teleprompter at his side, he needed and should have taken ample time to relax and get his own thoughts together; that’s something my experiences with him tell me he finds quite difficult.

Perhaps he did get his own thoughts together, but inadequately and far too introspectively. Before saying, you didn’t do that,”somebody else made that happen,” he may have reflected excessively on his own past.

Regardless of what he may have been thinking, it was a big mistake. It wouldn’t surprise me now were vast numbers of traitorous racist right-wing conspiracy nuts (more vile even than those who fired me) to revive their unseemly calls for the release of his college and law school records further to embarrass him by suggesting that in his “Somebody else made that happen” remarks he was being introspective about his great achievements during his bright college days in addition to his equally well deserved Nobel Peace Prize.

It’s a sad day for true democracy when the President can’t keep his deepest thoughts (if any) and ruminations to himself; they are none of the business of the little people and they must not be made privy to them. Without me at his side, President Obama simply can’t and won’t hide them effectively. He stands in grave danger of becoming the bane of his own existence and of losing the reelection that is rightfully his because of it.

Please, Mr. President, I beg of you — take me back or at least find another highly competent teleprompter to serve you. You absolutely must arm yourself to respond appropriately, calmly, with apparent candor and, most of all, effectively to scurrilous lies and distortions such as these:

There will be much more such junk over the next few months; only with your trusted and loyal teleprompter can you touch it in the best ways possible to emasculate it.

I was graduated from Yale University in 1963 with a B.A. in economics and from the University of Virginia School of law, where I was the notes editor of the Virginia Law Review in 1966. Following four years of active duty with the Army JAG Corps, with two tours in Korea, I entered private practice in Washington, D.C. specializing in communications law. I retired in 1996 to sail with my wife, Jeanie, on our sailboat Namaste to and in the Caribbean. In 2002, we settled in the Republic of Panama and live in a very rural area up in the mountains. I have contributed to Pajamas Media and Pajamas Tatler. In addition to my own blog, Dan Miller in Panama, I an an editor of Warsclerotic and contribute to China Daily Mail when I have something to write about North Korea.
View all posts by danmillerinpanama →
This entry was posted in Abraham Lincoln, Air travel, Campaign contributions, Conservatives, Democracy, Elections, Fairness, Humility, Humor, Lies, Obama, Opinion, Politics, presidential, Right wing conspiracy, Story telling, TOTUS, United States and tagged politics, roanoke virginia. Bookmark the permalink.