A Librul’s Views on Gun Control, Wealth Redistribution and Welfare

Posted on 15 January 2013 by danmillerinpanama

This is a guest post by the Very Honorable Ima Librul, Senator from the State of Utopia. He recently explained some of his difficulties in growing pineapples and focuses here on other major problems and opportunities facing modern American society. We are privileged to have a post of this caliber by a quintessential Librul such as the Senator, a charter member of President Obama’s Go For It Team.

Restrictions on firearm use and ownership will stimulate individual initiative, redistribute wealth and
end welfare as we know it.

Our modern welfare system redistributes wealth from the rich to the poor, a noble social goal and the principal function of every enlightened Government. Nevertheless, there is room for improvement — as President Obama would be among the first to acknowledge. Confiscating firearms from comparatively wealthy citizens will decrease existing disparities in wealth and thereby reduce the need for welfare. This will result in substantial cost savings, perhaps permitting a balanced budget as early as the year 3013 and a start to be made on eliminating the national debt as early as 3052. It will do so by encouraging those now dependent upon governmental largesse to exercise their individual initiatives in helping themselves, ultimately a win-win situation for everyone with which all conservatives should be delighted if they gave it even a moment’s thought. This article illustrates their confusion:

Liberal philosophy is rooted in something deeper than in just the Pro-Choice stance. It is rooted in entitlement: the belief that others owe us just about everything, and that if we in our lives are not full-up on what we “deserve”, then the government should take from everyone else and right this moral wrong. (Emphasis added.)

That explanation is only partially correct because it ignores the human desire for self reliance. The self-help wealth redistribution in which our nation is now to engage recognizes and encourages our self-help urges.

Far too many suffering from Unfair Deprivation Syndrome (UDS) and Ownership Insufficiency Anemia (OIA) have been threatened, wounded and even killed by others lamentably suffering from Excessive Greed Syndrome (EGS). The unfortunately devastating mental illnesses soon to be known as EGS will be recognized later this week by the Amalgamated Unions of Psychiatrists, Psychologists and Other Librul Mental Health Luminaries (AUPPOLMHL), which will need at least another decade to study and opine concerning UDS and OIA. However, since EGS is the most widespread and debilitating of all mental illnesses, it is gratifying that many highly regarded scholars are about to recognize it formally and will soon recommend appropriate psychotropic drugs and other therapies. The Department of Humane Services will then adopt the AUPPOLMHL recommendations and proceed as it must against the ravages of EGS. 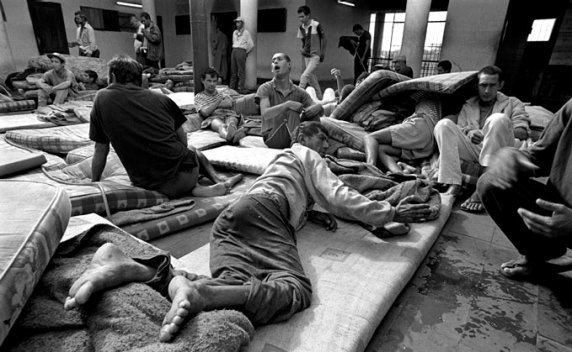 Those who must be rehabilitated shall be, humanely.

With the anticipated great numbers of military personnel soon to be discharged from the services as President Obama’s Smart® diplomacy makes them redundant — permitting wasteful military expenditures to be cut to the bone and through the bone — discharge screening will include suitable diagnostic and remedial procedures to ensure that upon return to civilian life they will no longer crave Weapons of Mindless Destruction (WMDs). Many suffer from Post Traumatic Stress Syndrome and they, along with most others, must be prevented from owning and using WMDs for which they are obviously unsuited in a civilian environment. Having left the organized militia commonly referred to as the United States Military, which provided all necessary weaponry, they indisputably have no rights under the Second Amendment to arm themselves.

Far too many EGS sufferers have shot and physically disabled burglars, robbers and others rather than give them, cheerfully, what they must desperately need and want. They may well need food and other things for their little children or their elderly parents! One reads almost daily of demented and hence greedy property owners assaulting those who desire only to relieve them of the heavy burdens of property ownership and to shoulder those burdens themselves. Have the unfortunates with EGS no sense of humanity or of the brotherhood it entails? Do they place no value upon human life? It is terrible national disgrace that even in our grandly transformative era those afflicted with EGS have been permitted to own, display and even to use vile and dangerous looking assault weapons that could easily cause their victims to suffer heart attacks, strokes or worse. Such WMDs are prohibited for non-governmental use in all civilized nations because they are, by definition, useful only for assault, not for defense. Without doubt, they must be banned immediately in the United States as most Americans now realize.

Firearm ownership also burdens our medical care system unfairly and increases costs for all, causing difficulties in implementing and administering President Obama’s signature legislation, the Affordable Health Care Act (AHCA). Like military personnel being discharged, EGS sufferers need psychiatric treatment. That is the only sensible, indeed the only common sense way to proceed. Anticipated savings from diminished welfare payments and from no longer needing to treat unfortunate victims of EGS sufferers will easily make up for any minor costs in providing treatment for any means-tested EGS sufferers eligible for Federal assistance.

The Obama Administration’s much maligned Fast and Furious program was intended to enhance wealth redistribution in Mexico and had countless successes. Sadly, those successes have been little noticed by the rabidly conservative and hence anti-Obama mass media, intent only upon destroying the legacy of our Best President Ever. Similar successes can and will be replicated many-fold because the Administration — urged on by our highly regarded Mexican colony — now plans something very similar for the United States. It is high time to redistribute firearms from those mentally ill with EGS to those who need them most in order to develop initiative, thereby to earn their livings and hence to be removed from the welfare rolls. Soon, the senseless slaughter of innocents in the United States will decline to levels already seen in tranquil and prosperous Mexico.

Some burglars, robbers and others may desire something beyond their fair shares of unfairly assigned property. That is progressive and therefore good. Their rights of free choice must be respected because they are guaranteed by the same sections of the Constitution that guarantee free condoms and abortifacients for all. To do otherwise would infringe upon their sacred constitutional rights, something which a world class constitutional scholar such as President Obama would never permit.

Ancient Victorian morality, as represented by those who would deny the constitutional rights of rapists, pedophiles and others, has become passé and must be put aside — all for the common good and particularly that of the next generations. Tremendous strides have already been taken in academia and in the military, and it is high time for civilian society to join in marching ever forward. As rape and similar sports grow in popularity, reality shows based on them will flourish and Olympic events will be broadcast worldwide, providing economic and other benign stimuli everywhere. As their popularity continues to increase countless other sectors of American society will also be stimulated.

As President Kennedy — nearly as highly regarded as our First Black President, President Clinton — also said, “Ask not what your country can do for you. Ask instead what you can do for your country.” He did much to help his country and we must all now get in step with him as well as President Obama, our second Black president, our first Jewish, Hispanic, Female, Asian and Gay President. With those demographics he is unbeatable and the only fair and reasonable way for our nation to achieve her manifest destiny of fairness, freedom of choice and multicultural happiness is summarized above. Every single one of President Obama’s initiatives will advance the march of American Society onward and upward forever toward her destiny. There can and shall be no turning back from the proven path to a truly fair, equitable, multicultural and just society.

You thought Senator Librul was joking?
Even my dog Bo knows better than that!

Just remember, if we weren’t all crazy we’d all go insane.

What the Hell. Here’s another.

I was graduated from Yale University in 1963 with a B.A. in economics and from the University of Virginia School of law, where I was the notes editor of the Virginia Law Review in 1966. Following four years of active duty with the Army JAG Corps, with two tours in Korea, I entered private practice in Washington, D.C. specializing in communications law. I retired in 1996 to sail with my wife, Jeanie, on our sailboat Namaste to and in the Caribbean. In 2002, we settled in the Republic of Panama and live in a very rural area up in the mountains. I have contributed to Pajamas Media and Pajamas Tatler. In addition to my own blog, Dan Miller in Panama, I an an editor of Warsclerotic and contribute to China Daily Mail when I have something to write about North Korea.
View all posts by danmillerinpanama →
This entry was posted in 2016 Obama's America, Abuse of Power, Chavez, Conservatives, Constitution, Democrats, Department of Defense, Equality, Executive Decree, Fairness, Feminists, Government reliance, Gun control, Health Control, Humor, Libruls, Mexico, Nonsense, Obama, ObamaCare, Republicans, Satire, United States, Venezuela and tagged governmental largesse, politics, wealthy citizens. Bookmark the permalink.

34 Responses to A Librul’s Views on Gun Control, Wealth Redistribution and Welfare