Posted on 27 September 2013 by danmillerinpanama

Loyal civil servants, both Sir Humphrey and Mr. Woolley (eventually to be Sir Bernard) had devoted their careers to rising through the civil service ranks to the top and to obstructing any developments which might diminish the powers of the civil service over elected officials whom they regarded — in many cases legitimately and certainly so in the case of Prime Minister Hacker — as their intellectual inferiors.

In the video below Hacker, who had just a few days previously gone for an audience with the Queen, “kissed hands” and become Prime Minister, received information on Britain’s nuclear deterrent and on his power to unleash it. That evening, he took instruction from Government’s Chief Science Adviser and was led to understand why he would never do it.

Based on his new and profound insights, Hacker resolved to adopt his Grand Design. It involved cancelling Britain’s fifteen billion dollar purchase from the United States of Trident and Cruz nuclear missile systems and restoring conscription, needed to beef up the nation’s far more useful conventional forces. That, he thought, would also reduce the high unemployment rate for youth while forcing them finally to learn skills which the comprehensive education system had not managed to teach them: how to read and do simple arithmetic and even to bathe, for example.

Briefly, the video segues into PM Hacker’s underprivileged position of living in an apartment above the shop at Number Ten but having no government employee to prepare his lunch unless joined by a foreign dignitary or someone comparable for a state luncheon. He became victorious, securing his proper place in history by becoming the first Prime Minister in two hundred and fifty years to be provided a cook at Government expense. Hacker’s victory came just at the end of his discussion with (and successful for) Sir Humphrey about his anticipated visit to Washington to confer with the President of the United States.

Sir Humphrey was much opposed to the Grand Design and enlightened Hacker on the unfortunate political consequences he would face during his visit to Washington should he even mention his proposed cancellation of the Trident and Cruz purchase there. Merely a fleeting suggestion of possible cancellation would cause Hacker’s reception by the President to be frigid at best — should the President meet with him at all. That would undermine the entire purpose of the visit, ample favorable media publicity back home in England about the President’s confidence in and warm regard for Hacker. Hacker did not mention his Grand Design to the President and received the desired publicity.

However, shortly after his return to London, the Prime Minister insisted on making his Grand Plan the centerpiece of his first television broadcast to the nation as Prime Minister. Here, from PM Hacker’s diary, is his account of a discussion with Malcolm Warren, the Number Ten Press Officer. When Mr. Warren asked him what the broadcast would be about,

I couldn’t think what he meant for a moment. Obviously the broadcast is to be about me. I explained this to him, and he saw the point entirely. However, he wanted further clarification on one small matter of detail: what exactly was I going to say?

I couldn’t see that this mattered much, but he wanted to know which policies I’d be referring to. I explained that it would be the usual: go forward together, a better tomorrow, tighten our belts, all pull together, healing the wounds, that sort of thing.

He was happy with that, but urged me to consider what I’d say specifically. My first thought was that I’d talk about specifically tightening our belts, healing specific wounds in our society.

But Malcom pressured me to consider saying something new. I’d never considered that. Then, suddenly, I realized what an opportunity I have here: I shall talk about my Grand Design.

At his next meeting with the Prime Minister Mr. Woolley tried, lukewarmly, to support his plan to feature the Grand Design in his address. Then, during discussions with Sir Humphrey, Woolley pointed to a public opinion poll indicating popular support for reinstating the draft. The poll was counter to Sir Humphrey’s views and he, as usual, dismissed it in short order.

Thanks and a tip of the hat to Outsourcing Our Foreign Policy, Obama-Style

Like Prime Minister Hacker, President Obama is all about “I, Me, My and Mine.” Similarly, He can pose in public as a humble yet masterful politician if He has been guided in the proper directions by his betters, including His teleprompter, The Really Honorable I.M. Totus — if they work for rather than against Him.

Neither PM Hacker nor President Obama was adequately prepared for his position at the beginning. PM Hacker likely could never have become fully prepared for his, although he did eventually get better at dealing with Sir Humphrey and Mr. Woolley, both of whom he occasionally bested at least briefly.

President Obama is unlikely ever to be prepared to function even barely adequately as the President of the United States. Prime Minister Hacker suffered from delusions of competence and of grandeur, sometimes (for example) referring to the Queen’s subjects as his subjects. President Obama appears to suffer from similar delusions, encouraged by His adoring media and other fans. 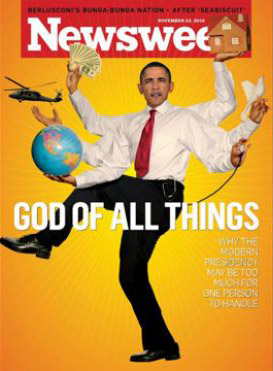 President Obama and His red lines

In the first video above, PM Hacker learned that red lines were useless when deployed against Soviet salami tactics. Iran, with which President Obama is pursuing negotiations around, about, over and under His alleged red line(s) on nuclear weapons, has been using salami tactics all along. It has substantially enriched Uranium, backed off a bit by converting substantially enriched Uranium to something less worrisome and then enriched more Uranium up to or past the worrisome levels. Iran continues to increase the numbers, and the efficiency, of its centrifuges used for Uranium enrichment and appears to have substantial facilities for Plutonium production and weaponization.

At what point, if any, as Iran continues to use salami tactics will President Obama say enough is enough? At what point will He say what He means and mean what He says? Will that happen before or after Iran has nuclear warheads fitted on missiles pointed at Israel or some other nation? At the United States? He will almost certainly not use United States’ nuclear weapons on Iran, but what — if any — type of conventional forces will He use or encourage others to use? Will He merely try to get more international sanctions imposed as has been done with less than even marginal success with North Korea, which already has nukes and is already quite advanced in developing missile delivery systems probably capable of delivering miniaturized but effective nukes even against the United States?

Until which, if any, salami phase will President Obama retract His apparent “hold in place” directive to Israel? Will attaining what He views as “success” in the Palestinian – Israeli “peace negotiations” be needed to get Him to lift the hold? Will that success be as historically significant as Prime Minister Hacker’s success in establishing his grand legacy by winning free lunches at Number Ten for himself?

At what point will Israel ignore His directive? If and when Israel proceeds militarily against the Iranian threat despite the hold, what will President Obama do or try to do? Might He find a useful crisis elsewhere to distract attention? Racist Republican terrorists disparaging His signature legislation, ObamaCare (now also known as The Adorable Care Act), perhaps? Might He seek a U.N. Resolution against Israel? Might He try a Chávez-style Cadena? Might He blame it all on the horrors of Climate Change, which vile opponents of humanity have kept Him from defeating?

He is such a nice little President that He can attempt almost anything if it is likely to be politically useful for Him although otherwise ineffective. Since a majority of those who vote don’t care or haven’t bothered to garner enough information to be concerned — even from the “legitimate media” — He probably has a very good chance of blundering and blithering along until He leaves office in January of 2017. 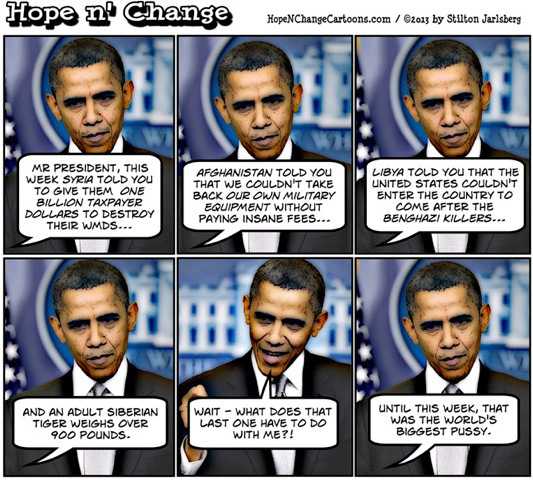 Thanks and a tip of the hat to World’s biggest pussy recently discovered.

I was graduated from Yale University in 1963 with a B.A. in economics and from the University of Virginia School of law, where I was the notes editor of the Virginia Law Review in 1966. Following four years of active duty with the Army JAG Corps, with two tours in Korea, I entered private practice in Washington, D.C. specializing in communications law. I retired in 1996 to sail with my wife, Jeanie, on our sailboat Namaste to and in the Caribbean. In 2002, we settled in the Republic of Panama and live in a very rural area up in the mountains. I have contributed to Pajamas Media and Pajamas Tatler. In addition to my own blog, Dan Miller in Panama, I an an editor of Warsclerotic and contribute to China Daily Mail when I have something to write about North Korea.
View all posts by danmillerinpanama →
This entry was posted in 2016 Obama's America, Cabinet offices, Civil Service, Democracy, Elections, Formerly Great Britain, Humor, Military, Nuclear weapons, Obama, Opinion polling, Politics, Prime Minister, Russia, U.S.S.R, United States, White House and tagged barack obama, Bernard Woolley, Grand Design, Humphrey Appleby, Jim Hacker, politics, Prime minister, science. Bookmark the permalink.

6 Responses to Yes, Prime Minister. Or rather, Yes, Mr. President.