Dennis Rodman to be U.S. ambassador to Iran

Posted on 15 January 2014 by danmillerinpanama

Due to incredible advances in Iran’s nuclear disarmament,
diplomatic representation is necessary. 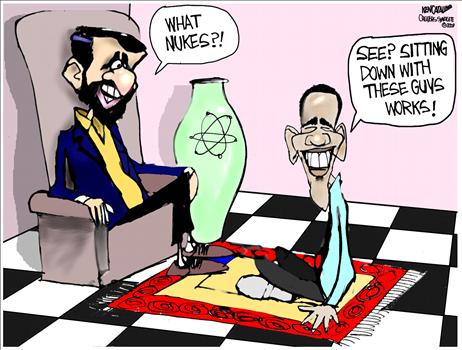 Improvements in U.S. – DPRK relations fostered by Dennis Rodman, unofficial Ambassador to the Democratic People’s Republic of Korea (DPRK), succeeded beyond even the wildest of speculations. Indeed, he helped to make our relationship with the DPRK better even than our relations with many of our  closest allies. Although President Obama’s own historic foreign policies deserve much of the credit, His limitless humility makes him delighted to share the fruits of His success with others. To proclaim His recognition of Mr. Rodman’s own successful efforts, He has established diplomatic relations with Tehran and dispatched Mr. Rodman as His interim ambassador in anticipation of any necessary Senate confirmation.

Ambassador Rodman is presently traveling to Tehran, where he will contact President Rouhani and Supreme Leader Khamenei to discuss important matters and, it is anticipated, make historic breakthroughs — as befits an ambassador appointed by President Obama. His initial plan is to help President Rouhani improve his game of hoops in order to establish trust and good will. Surely, these efforts will cause Iran to stop mocking us while President Obama also moves to increase Iran’s trust by preventing Congress from enacting new sanctions and praises the recent P5+1 “deal” to implement the November 24th “deal.” No text of the recent “deal” to implement the November 24th “deal” has yet been released and none may ever be. There are good reasons. It might contain classified information useful to our enemies such as Israel. Besides, it could give cynics bases for disputing its enormous benefits as well as for disparaging the historic transparency of the Obama Administration.

Ambassador Rodman is expected to explore ways to improve human rights for Iranians by offering Obama Administration expertise in establishing a fair, just and inexpensive national health system along the lines of ObamaCare. To assist in furthering the rights of women to fair and equal health care, the Obama – Rodman proposal will offer (subject to approval of the closest living male relative of the female) free Female Genital Mutilation (FGM), contraception and abortions up through at least the fifth year following conception. These services will, consistently with requirement of the Quran, be provided exclusively by women suitably trained by other skilled women.

U.S. aid to Iran, to be administered initially by Ambassador Rodman, will be increased substantially and will focus on nuclear powered generation of electricity and production of life saving radioactive isotopes. The latter will be delivered to needy patients by drones and other aerial vehicles capable of transporting them to Iranian subjects and their friends in areas still occupied by Israeli and other hostile regimes.

Ambassador Rodman intends to seek help from his friend for life, Kim Chi-un of the DPRK, in improving Iranian nuclear and other technology. Dear Leader Kim doubtless will be pleased to help, having recently

vowed unsparing support for the country’s [DPRK’s] science and technology sectors “to defeat enemies and to boost the economy,” Pyongyang’s media said Wednesday.

He made the pledge during his field guidance to the country’s State Academy of Sciences in South Pyongan Province, the North’s official Korean Central News Agency (KCNA) reported, without elaborating on the date of the trip.

“In the face of increasingly vicious schemes of isolation and suppression by imperialists, Kim stressed roles by scientists and technicians to win victory in the showdown with enemies,” according to the KCNA.

Although uncertain, it is likely that Ambassador Rodman will soon ask Dear Leader Kim to travel to Iran and provide his invaluable field guidance to technical personnel there.

U.S. domestic oil production will be curtailed substantially, if not eliminated, to give Iran a common sense, fair and just opportunity to regain her principal means of sustenance and infrastructure development by selling all the oil she can produce. Any remaining concerns that the Keystone Pipeline might someday be approved will be eliminated and the only foreign oil permitted in the U.S. will henceforth be from Iran and Venezuela.

Ignorant, politically and religiously incorrect savages in the U.S. have become notorious throughout the civilized world for their vile blasphemies of Islam, the only religion of true peace and love. By Executive Decree, President Obama has ordered that blasphemy against Islam will henceforth be deemed a Federal hate crime and prosecuted vigorously by the Department of Justice. A new Anti-Blasphemy Division has already been established at the Department of Justice and is headed by former Secretary Clinton’s former principal adviser on Islam, Huma Abedin.

Recognizing the need for more penitentiary space than currently available, prisoners unjustly incarcerated for “terrorism,” wife beatings, honor killings and other religious exercises will be released and paid a minimum of twenty-five dollars per hour for each hour of incarceration, pre- and post- trial.

The Iraqi version of Common Core, highly regarded by educators in the United States, is already being studied by teams from the U.S and Iranian Departments of Education. They are exploring ways to adapt our Common Core program to make it conform even more than at present to the Iranian initiative. Details may be released as they become available.

Sadly, and contrary to any rumors, there is no reason to believe that soon-to-be-Ambassador Rodman (or for that matter President Obama) is traveling to Iran on the ship depicted in this video.

As this article demonstrates the entire world, centered as it often seems to be in Washington, D.C., has gone crazy; bonkers; stark raving mad or something. Perhaps, on reflection, Dennis Rodman would be the possible best choice President Obama could make as His ambassador to Iran. Perhaps he would be a great President as well and besides, Mr. Bieber is too young and otherwise unqualified under Article II of . . . . .  whatever. But what difference does that make now?

I was graduated from Yale University in 1963 with a B.A. in economics and from the University of Virginia School of law, where I was the notes editor of the Virginia Law Review in 1966. Following four years of active duty with the Army JAG Corps, with two tours in Korea, I entered private practice in Washington, D.C. specializing in communications law. I retired in 1996 to sail with my wife, Jeanie, on our sailboat Namaste to and in the Caribbean. In 2002, we settled in the Republic of Panama and live in a very rural area up in the mountains. I have contributed to Pajamas Media and Pajamas Tatler. In addition to my own blog, Dan Miller in Panama, I an an editor of Warsclerotic and contribute to China Daily Mail when I have something to write about North Korea.
View all posts by danmillerinpanama →
This entry was posted in Ambassador Rodman, Clinton, Common Core, Dennis Rodman, Education, Foreign aid, Freedom, Health Control, Holder, Iran, Islamists, Israel, Justices, Keystone pipe line, Khamenei, Kim Chi-un, Korans, Korea, Libruls, Middle East, Netanyahu, New Deal, North Korea, North Korean missiles, Nuclear weapons, Obama, ObamaCare, Oil, P5+1, Peace and Love, Peace in our time, Political Correctness, Politics, Satire, Shari law, Unified State of Obama, Venezuela, War on women and tagged Iran, north korea, obama, Rodman. Bookmark the permalink.

11 Responses to Dennis Rodman to be U.S. ambassador to Iran