Dictatorship and violence reign as Venezuela approaches a crisis

Posted on 13 February 2014 by danmillerinpanama

The economy is almost beyond repair, with inflation exceeding fifty percent annually and getting worse. Shortages, corruption and censorship are endemic. Yesterday, approximately 10,000 demonstrators protested. The Chavista regime responded violently, the only way it understands.

Daniel, as far as I am aware the only English language writer still blogging in Venezuela, posted an article late yesterday titled A new landmark date for repression in Venezuela: confirming the dictatorship. More from him shortly, but first these reports:

BBC News — Police were out in force at the anti-government rally
in Caracas on Wednesday.

According to the BBC News article linked above with the photo ,

The violence broke out after some 10,000 demonstrators had gone home following a mainly peaceful rally.

Two people died after gunmen on motorbikes opened fire on the remaining crowd. A third died in later clashes.

The march was the latest in a series of mass protests against the policies of President Nicolas Maduro.

A crowd of demonstrators, many of them students, marched to the federal prosecutor’s office to demand the release of 13 protesters who they say were illegally detained in previous marches. 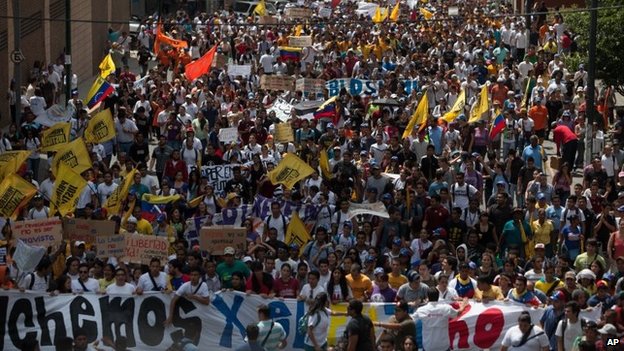 President Nicolas Maduro condemned the incidents, which he blamed on a “neo-fascist upsurge.”

The president called for peace, but stressed there would be no impunity for those who engaged in violence,

“There will be no coup d’etat in Venezuela, you can be absolutely sure of that, let the whole world know that,” he said in a TV and radio broadcast.

“Just as we condemn the violent incidents, we say to all Venezuelan families that we have to remain ready to continue fighting, calmly but with determination,” Caracas mayor Antonio Ledezma said.

“You have to know, Mr Maduro, that whatever you do, what started today will not stop until change is achieved in peace and with democracy for all Venezuelans,” he added.

Chaos erupted in downtown Caracas when the gang roared up and began shooting at more than 100 protesters who had been sparring with security forces at the tail end of heated but otherwise peaceful protests organized by hard-line members of the opposition. Most of the roughly 10,000 participants in the demonstrations had already gone home. [Emphasis added.]

As people fled in panic, one demonstrator fell to the ground with a bullet wound in his head. Onlookers screamed “assassins” as they rushed the 24-year-old marketing student to a police vehicle. He was later identified by family members as Bassil Da Costa.

Also killed was the leader of a pro-government 23rd of January collective, as militant supporters of Venezuela’s socialist administration call themselves. National Assembly President Diosdado Cabello said the “revolutionary” known by his nickname Juancho was “vilely assassinated by the fascists” but he didn’t provide details.

The spin placed on events by the Chavista regime has been remarkable, even for Venezuela.

Venezuelan media, controlled by the regime with ever increasing severity, have not been “fair and balanced.” Quoting from Daniel’s article linked above,

The regime forced cable operators, at least Direct TV that I receive, to drop NTN24 from Colombia which had a live stream (their web page is also blocked with my provider). Of course Maduro was on cadena inaugurating a grotesque new monument on top of a hill that I saw on my way through La Victoria. I also saw a gazillion cops and Nazional guards all the way from Caracas to La Victoria… apparently not all officials summoned to attend could go by helicopter so the highway should be made safe for them, just in case their car broke down and they got Speared.

What was more surprising is that CNN in Español showed 25, TWENTY FIVE minutes straight of Maduro cadena before they eventually got tired. I was flabbergasted, the more so that CÑN did not give the equivalent time to opposition leadership. Were they afraid to be taken off the grid too?  It would be nice to know why Patricia Janiot went along. Still, CÑN showed that way, way less people attended the Maduro shindig than the opposition nice rally in Caracas and significant activities in many cities of the country (and Capriles more and more idiotically tweeting at sensing the situation escaping his slighter and slighter influence)

Eventually I started to get the body count. I looks like the regime used storm troopers to kill 3 protesters although 1 may be a chavista. Dozens of people injured?

In a follow-up article titled The regime has decided to strike: is this a mark of strength? Daniel observes,

Well, it seems the regime is not satisfied with at least three deaths, dozens of injured, X arrests and a few “disappeared”. It has decided to take the opportunity to start removing opposition leaders that are bothersome. Leopoldo Lopez is the first one, accused even of throwing the baby’s water today.

According to the English language edition of Venezuelan media outlet el Universal,

On Wednesday evening, Caracas 16th Control Judge Ralenys Tovar Guillén admitted the petition made by the Attorney General Office to detain the ex Chacao mayor and ordered the Bolivarian Intelligence Service (Sebin) to apprehend him and enter his residence for the purposes of conducting a search, police sources reported.

Under warrant of arrest N 007-14, the judge ordered to capture López to sue him for a wide array of offenses, ranging from conspiracy, solicitation to commit a crime, public intimidation, fire of public premises, damages of public property, murder and terrorism.

The decision against López came shortly after the National Assembly Speaker, Diosdado Cabello, charged him with the violent events occurred on Wednesday at the end of an opposition march resulting in the death of two students and a pro-government leader.

Back to Daniel’s article,

Let’s consider this a little bit. First, it is a mistake as not only it consecrates Lopez as the main opposition leader, but also it definitively will bring Venezuela under international focus. Let me remind readers that Lopez has defeated the regime in the Inter American Court for Human Rights, a ruling that Venezuela has refused to recognize, a default that can be pinpointed as the official moment of the beginning of its slide as a rogue nation. I think it is will be very difficult for Maduro and co to manage this internationally at a time when Venezuela should be playing nice to get help in solving the terrible economical/financial problems we face.

Second, that will only light further more protests, though arguably a section of the regime is looking forward it. We can already guess that Voluntad Popular activists may start going into hiding, or climb barricades. Let me put it this way: caution, no matter what hurry presides the regime, would have dictated to prepare public opinion for a couple of days before jailing Lopez. Heck, even giving him a chance to escape the country. [Emphasis added.]

So, how can we conjugate the excessive repression of today, the provocation the regime made through some security personnel and storm troopers with the late night arrest order for Lopez?

Daniel then offers some interesting speculation and concludes,

Whatever it is, to answer the title question I think that all of this is the mark of a regime scared, really scared. And thus very dangerous. [Emphasis added.]

The Venezuelan opposition is in substantial disarray, but not uniquely so. El Presidente Maduro — who rules by Executive Decree pursuant to an enabling act passed by the National Assembly — and National Assembly President Diosdado Cabello (also a Chavista) are at odds, apparently fighting for power.

Before Chavez, Venezuela was a successful petro-state with a significant middle class and stable economics. Then Chavez created a command economy, expropriated private property, and ruled by whim for most of his term as president/dictator. He managed that through brute force and a cult of personality, but his successor only has brute force to use. [Emphasis added.]

This could get ugly quickly. Perhaps the American media might get interested in this story sometime soon, enough to report not just when the bullets fly, but why Venezuelans are marching in the streets and their government is at least tacitly allowing violence to drive them off.

Any revolution in Venezuela will, of course, “get ugly quickly.” If enough people care, it seems likely to happen sooner rather than later.

The Cuban Government expresses full support to the Bolivarian, Chavist Revolution and urges for the broadest international solidarity with the conviction that the Venezuelan people will know how to defend their irreversible gains and the legacy of the late President Hugo Chavez, says the text.

The communiqué recalls that the events that occurred yesterday as the country’s youth marked the bicentennial of the heroic battle of La Victoria, are similar to those of April 11, 2002 that were part of a failed coup that was thwarted by peopleâ?Ös mobilization leading to a victorious Chavezâ?Ö return to office.

Cuba reaffirms its unconditional support to the tireless, visible efforts made by President Maduro and the political-military leadership of the Bolivarian Revolution to preserve peace, incorporate all the countryâ?Ös sectors and promote social and economic development in that sister nation, says the text. (Prensa Latina)

Obama Administration responds with customary vigor. Or something.

I was graduated from Yale University in 1963 with a B.A. in economics and from the University of Virginia School of law, where I was the notes editor of the Virginia Law Review in 1966. Following four years of active duty with the Army JAG Corps, with two tours in Korea, I entered private practice in Washington, D.C. specializing in communications law. I retired in 1996 to sail with my wife, Jeanie, on our sailboat Namaste to and in the Caribbean. In 2002, we settled in the Republic of Panama and live in a very rural area up in the mountains. I have contributed to Pajamas Media and Pajamas Tatler. In addition to my own blog, Dan Miller in Panama, I an an editor of Warsclerotic and contribute to China Daily Mail when I have something to write about North Korea.
View all posts by danmillerinpanama →
This entry was posted in Abuse of Power, Brutality, Chavez, Civil War, Corruption, Executive Decree, Free Press, free speech, Freedom, Government reliance, Inflation, Internet, Law and Order and tagged Caracas, Maduro, Police State, Revolution, riots, Venezuela. Bookmark the permalink.