Venezuela — Cuba is “helping” the Regime, but how about Iran?

Posted on 18 March 2014 by danmillerinpanama

As her de facto colony, Venezuela has Cuban assistance in resisting anti- regime protests. Iran also seems to be helping.

Although not very successful, Cuba has been helping the Venezuelan regime to respond in the only ways she understands to anti-regime protests. In consequence, there is increasing anger about Cuban intervention.

People are starting to express clear feeling of xenophobia, justified as it is against colonial masters: the Cuban mercenaries sent over by Fidel to control Venezuela. And the world saw that, which is not only an embarrassment for the regime towards its colonial masters as far as world P.R. go, but yet another variable thrown in the cauldron of the the brewing open rebellion.

The regime had to do something. What happened in the wee hours this morning may have been planned or was accelerated due to that march, but the point is that it was again bad timing for an increasingly tone deaf regime. The highlight was the militarization of Plaza Altamira which has been a mini evening war zone for the past month. Twitter already abounds with pictures of military personnel all over, going from registering innocent passerby to bringing buses with chavistas from somewhere to organize some kind of “liberation from fascism” celebration. This all perfectly useless even if they think Raul Castro may be happy.  Protesters will simply shift venues or wait for the military to tire of being in Altamira regularly insulted by passerby.

Maduro replied childishly yesterday that the anti Cuba protests are only going to strengthen the bilateral relation and to boot he is offering yet more joint programs (read: more cash for Cuba). For good measure he used that same speech to introduce that favorite of the enslaved Cuban population: ration cards.

Being a Cuban colony must be grand for those regimes willing to pay for the privilege. 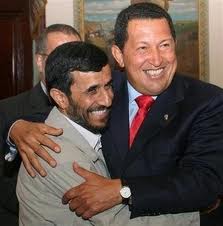 Iran and Venezuela have long had a symbiotic relationship. Iran has laundered billions of dollars through Venezuela, in large part to help Iran evade sanctions. According to Roger Noriega, a former United States ambassador and assistant secretary of state for western hemisphere affairs, Hezbollah, an Iranian sponsored terrorist group that has been gaining power in Venezuela, has assisted in arranging money laundering.

Today, March 18th, an article at Iranian Press TV reported that an Iranian Parliamentary team is en route to Cuba and Venezuela.

An Iranian parliamentary team has embarked on a six-day trip to Cuba and Venezuela despite attempts by the US to disrupt the visits by denying its airspace to the Russian plane carrying the lawmakers.

Boroujerdi had earlier said that the planned trip was aimed at further strengthening Iran’s relations with the Latin American countries.

According to an article posted at the Washington Times on March 17th, the Venezuelan colectivos — civilian paramilitary groups under control of the Venezuelan regime — have been receiving instructions from Iranian General Mohammad Reza Naqdi. 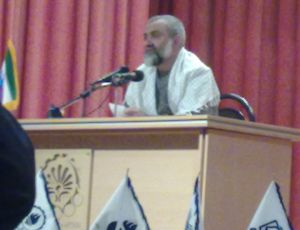 Earlier in his career Naqdi served as the Iranian Police Force’s Counter-Intelligence Chief [1] and is also reported to have been involved in “crackdowns” during the 1997-2005 administration of Khatami including the 1999 student protests.[2] Amnesty International reported that in March 1999 Iranian authorities announced that General Naqdi, chief of police intelligence at the time, to be tried in May by a military court along with 10 of his subordinates. “The charges against them are believed to include `unlawful arrest` and `using torture to elicit confessions’.”[3] He was found not guilty.

Naqdi was appointed by Supreme Leader Ali Khamenei as commander of the Basij in October 2009, replacing Hossein Taeb.[4] He has been described as possessing “conservative credentials” and his appointment was said (by Mohsen Sazegara) to have “shattered the hopes and plans of those who thought they could ease” the unrest and protest following the reelection of President Ahmadinejad.

Returning to the Washington Times article,

Several defense agreements followed, but one in particular is relevant to what is transpiring on the streets of Venezuela today.

According to sources within the Venezuelan military, Gen. Naqdi’s role in these high-level meetings was to serve as an adviser to Venezuela’s Ministries of Defense and Interior to aid in training their civilian militias, the now-infamous colectivos. [Emphasis added.]

A first glimpse of this advisory support came during the 2012 presidential election in Venezuela, as government documents were leaked to the foreign press about the Chavista plans to stir up civil unrest if their leader, Hugo Chavez, were to lose the elections on Oct. 7 of that year.

According to the leaked government documents, the Chavistas planned to mobilize the colectivos as a quick-reaction force called Redes de Movilizacion Inmediata, to quell opposition rallies and gain territorial control.

It appears that Iranian General Naqdi may also be active in Bolivia.

Bolivia has a presidential election scheduled for October, in which many opposition members think Mr. Morales is also preparing armed civil militias similar to the colectivos in Venezuela, to take action in case the Venezuelan opposition protests spread south along the Andean ridge into Bolivia.

Having someone of Gen. Naqdi’s caliber in Venezuela (and potentially Bolivia) is no trivial matter. His experience as the former deputy director for intelligence of the elite Qods Force, and his firsthand tactical knowledge of how to repress peaceful protests and incite violence against opposition members is well-documented. [Emphasis added.]

The similarities in the death of Genesis Carmona and Neda Agha-Soltan are hardly coincidental once one understands that those who pull the triggers, beat protesters, run the prisons and engage in torture are inspired, advised and trained in the same ruthless strategies for repressing their own people.

Iran’s Gen. Naqdi has made a living out of perfecting such strategies, and while he is not the only foreign adviser to Venezuela’s civilian militias, he may very well be the most notorious.

The P5+1 negotiations continue to limp along, without regard to the March 17th decision of Iran’s chief negotiator not to  host the chief EU spokesperson for dinner. Despite– or perhaps because of — the substantial lessening of sanctions and Iran’s declaration that she is Open for Business, Iran appears to be strengthening her ties with Latin American countries hostile to the United States and the freedoms associated with her. Meanwhile, Dear Leader Obama is rightly and increasingly viewed as a weak and indecisive little President, neither interested in nor competent to deal with foreign affairs.

Compared to President Obama, Russia’s Putin is viewed increasingly as strong and decisive — an outrageously easy comparison for Putin. Nevertheless, as long as Obama remains in office, the comparison will be useful in Putin’s dealings with Venezuela; ditto Iran, Cuba and other hostile nations. Venezuela

It’s a mess and the price we will have to pay is high.

Because human nature has not changed in 10,000 years, the world’s bad actors are throwing elbows. From China‘s aggressive moves in the South China Sea and increasing military budget, to Syria’s dismissal of U.S. threats and stepped-up murder of tens of thousands, to al-Qaida’s resurgence in Maghreb, Iraq, and Afghanistan, to Russia’s insouciant acquisition of Crimea and perhaps more, the world is becoming more dangerous. Most ominously, the administration continues to indulge the greatest sham of our time — the fiction that we are engaged in negotiations to prevent Iran from obtaining nuclear weapons.

There is one Obama accomplishment that cannot be denied — supplanting Jimmy Carter as the worst foreign policy leader of our time.

How many more days until President Obama retires? It’s tiresome counting the days till then. How many days after that will we need to recover from His legacy of a “fair, smart, reasonable and commonsense” foreign policy? Will that even be possible?

The Iranian Ambassador to Russia contends that

Iran does not support outsiders’ intervention in regional disputes and believes that regional players should take measures to help resolve regional issues . . . .

This principle must not apply to Iranian intervention in Latin America’s regional disputes.

Michael Ledeen at PJ Media posted an article titled The Big Story — the Global War — Goes Mostly Unreported. These paragraphs, and several others, pertain to the situation in Venezuela:

The Venezuelan uprising may turn out to be the biggest story of all, because it is part of a world-wide battle that pits anti-Western tyrannies against their own people, and against their neighbors.  It is of a piece with Ukraine, Syria, Iraq, Egypt, Lebanon, Iran and Russia itself, where, just a few days ago, fifty thousand Muscovites demonstrated against Putin’s imperialist moves in Ukraine.

Today, the repression of the Venezuelan people is under the command of Cubans and aided by Hezbollahis, which is part of the same picture that has Russian troops-in-mufti operating in Ukraine, Iranian Revolutionary Guards and Hezbollah killers operating in Syria, Iranian-guided terrorists fighting in Yemen, Iranian-trained Taliban killing Afghans and Americans, and on and on.  That picture has been clarified by the announcement that Russia is opening naval bases in Latin America.

Just as the fall of Assad would be a devastating blow to Russia and Iran, the Axis must defend the Venezuelan dictatorship, because its fall would seriously challenge the anti-Western alliance.  Venezuela is a lynchpin in the Axis.  Caracas launders money, transships weapons (as between Russia, Syria and Iran, for example) and drugs, and provides safe havens and training facilities for jihadis, from which they can move toward our poorly defended southern border.  Thus Cubans fight Venezuelans in the streets.  Thus Russian warships are headed for the Caribbean and the southern oceans.

Yet we, for the most part ignore the situation in Venezuela. Why?

I was graduated from Yale University in 1963 with a B.A. in economics and from the University of Virginia School of law, where I was the notes editor of the Virginia Law Review in 1966. Following four years of active duty with the Army JAG Corps, with two tours in Korea, I entered private practice in Washington, D.C. specializing in communications law. I retired in 1996 to sail with my wife, Jeanie, on our sailboat Namaste to and in the Caribbean. In 2002, we settled in the Republic of Panama and live in a very rural area up in the mountains. I have contributed to Pajamas Media and Pajamas Tatler. In addition to my own blog, Dan Miller in Panama, I an an editor of Warsclerotic and contribute to China Daily Mail when I have something to write about North Korea.
View all posts by danmillerinpanama →
This entry was posted in Bolivia, Chavez, Cuba, Democracy, Foreign policy, Freedom, Ideology, Iran, Iranian Election, Islamist rage, John Kerry, Khamenei, Maduro, Nuclear weapons, Obama, Obama's America, P5+1, Russia, Unified State of Obama and tagged Bolivia, Cuba, Iran, Protests, Venezuela. Bookmark the permalink.

3 Responses to Venezuela — Cuba is “helping” the Regime, but how about Iran?