Posted on 23 March 2014 by danmillerinpanama

What can one write about when there’s nothing new and interesting?
Here’s an idea for a new conspiracy theory: Iran and Supreme Leader Khamenei are imaginary, created to distract us from real problems by giving us somebody and something to hate. That’s always been a useful ploy.

Does anybody dare talk about Holocaust in Europe? The Holocaust is an event whose reality is uncertain and, if it happened, it’s uncertain how it happened,” Khamenei said in an event in the northern city of Mashhad marking the Persian New Year’s Nowruz. 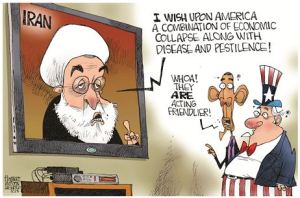 I have neither been to Iran nor met Khamenei; the maps and photos I have seen may, at best, be clever scams.

This alleged photo of Iranians involuntarily hanging tough might be of nothing more than a fraternity initiation proceeding at an Islamic university (or even at an interfaith mosque in Alabama). They may now be reclining  happily and peacefully as they memorize the Holy Koran to learn more devout and hence better ways to kill Jews, Christians and other infidels.

It’s all part of a diversionary Iran Scam

Iran, Khamenei and alleged P5+1 negotiations with alleged Iranians may be parts of a devious conspiracy theory, intended to distract the world from the horrors of anthropomorphic global warming (“AGW”). We know it exists, because St. Al the Gored has told us, repeatedly. 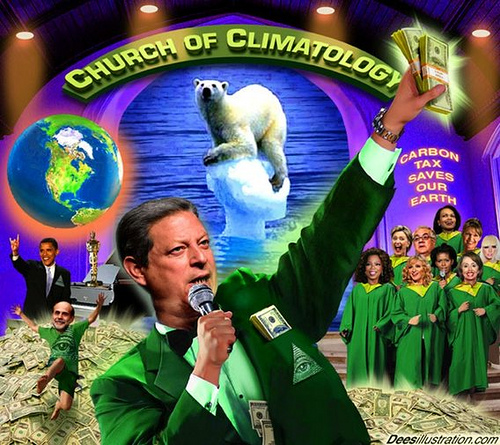 No less convincingly, Secretary Kerry has assured us not only that AGW exists but that it is the “most fearsome” horror facing all of humanity.

JAKARTA, Indonesia –  U.S. Secretary of State John Kerry on Sunday called climate change perhaps the world’s “most fearsome” destructive weapon and mocked those who deny its existence or question its causes, comparing them to people who insist the Earth is flat.

In a speech to Indonesian students, civic leaders and government officials, Kerry tore into climate change skeptics. He accused them of using shoddy science and scientists to delay steps needed to reduce emissions of greenhouse gases at the risk of imperiling the planet.

How can we be made to focus on real and undeniable problems if climate skeptics (not to mention ObamaCare skeptics) are permitted to distract us with probably non-existent, and at most minor, problems involving Iran, Khamenei, Islamist terror and nukes?

What would our hero, Big Bird say?

PS. One perhaps need not be a lunatic to come up with this stuff, but it helps.

I was graduated from Yale University in 1963 with a B.A. in economics and from the University of Virginia School of law, where I was the notes editor of the Virginia Law Review in 1966. Following four years of active duty with the Army JAG Corps, with two tours in Korea, I entered private practice in Washington, D.C. specializing in communications law. I retired in 1996 to sail with my wife, Jeanie, on our sailboat Namaste to and in the Caribbean. In 2002, we settled in the Republic of Panama and live in a very rural area up in the mountains. I have contributed to Pajamas Media and Pajamas Tatler. In addition to my own blog, Dan Miller in Panama, I an an editor of Warsclerotic and contribute to China Daily Mail when I have something to write about North Korea.
View all posts by danmillerinpanama →
This entry was posted in Al Gore, Antisemitism, Big Bird, Climate change, Conspiracy theories, Facts, Foreign policy, Freedom, Holocaust, Ideology, Islamists, John Kerry, Khamenei, Korans, Libruls, Muslims, Nuclear weapons, Obama, P5+1, Peace in our time, Satire, Snark, Unified State of Obama and tagged Conspiracy, Global warming, Gore, Holocaust, Iran, Kerry, Khamenei. Bookmark the permalink.