Posted on 3 April 2014 by danmillerinpanama

The process itself, rather than peace, has become the goal. 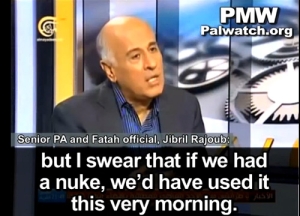 A bit of history

The notion that “the end justifies the means” is bad even when the end sought might be seen as beneficial. Transitory peace might be a beneficial intermediate end if the price of achieving it is not excessive. We should have learned about that shortly after 1938, when Prime Minister Chamberlain’s deal with Herr Hitler allowed German expansion into Czechoslovakia and produced a naval agreement between Britain and Germany.

My good friends, for the second time in our history, a British Prime Minister has returned from Germany bringing peace with honour. I believe it is peace for our time. We thank you from the bottom of our hearts. Go home and get a nice quiet sleep.[3]

That version of “peace in our time” was short-lived. Germany soon invaded Poland, apparently believing that other European nations would do nothing. World War II followed, with Britain, Europe and (even after Pearl Harbor on December 7, 1941 the United States) ill-prepared to fight. Whether Germany and Japan, or the United States and their allies, would prevail remained an open question for a couple of years.

Turning the “end justifies the means” notion upside down so that the means are seen as justifying the end sought — or perhaps so that the means become the end — does not improve the notion; particularly when the means — the “process” in the “peace process” — are distorted due to their perceived importance.

Apparently having given up all hope of bringing peace to the entire Middle East, let alone to Israel — assuming that either was once his naive objective — Secretary Kerry now apparently considers it necessary to keep his process alive regardless of the consequences. To that end, he has applied substantial pressures on Israel to make very damaging concessions merely to coax Palestinian Authority President Abbas to negotiate. Rather than respond by negotiating with Israel, Abbas simply demands — and Secretary Kerry seconds his demands — more concessions.

As observed in Disasterous outcome of the “peace negotiations,”

As anticipated, the Obama administration’s efforts to impose a peace settlement have proved to be a disastrous failure. It is immaterial whether the negotiations formally break down or a face-saving formula is adopted which is nonbinding and incorporates sufficient reservations to make it meaningless. Regrettably, the U.S. intervention has only exacerbated the situation and even undermined the chances of low-profile interim progress and economic cooperation. [Emphasis added.]

U.S. Secretary of State John Kerry has blustered and zigzagged between intimidating and occasionally placating Israel. The pressure was exerted overwhelmingly toward Israel while the Palestinians, who were treated with kid gloves, refused to make a single meaningful compromise. This generated enormous frustration and resentment of the U.S. among Israelis. [Emphasis added.]

The positive memories of U.S. President Barack Obama’s visit to Israel and the ongoing defense support and cooperation — now at an all-time high — were overshadowed by Israeli anger against the U.S. for bullying its government into releasing brutal mass murderers who were subsequently glorified as heroes by the Palestinian Authority.

The PA demanded this as a prerequisite even to agreeing to negotiate. An uninformed observer would assume that Israel was the supplicant and would be unaware that the territories were acquired only after Israel vanquished an Arab conglomerate that had initiated a war to annihilate it. [Emphasis added.]

Secretary Kerry’s is unable to produce even a short-lived disruption of Palestinian efforts to achieve the ultimate goal of eliminating Israel as the only reasonably free and democratic nation in the Middle East. Democracy with freedom is anathema under Islam and having somebody to hate is their most powerful weapon.

Don’t worry; Israel is expendable because there are plenty of others to hate.

Secretary Kerry could not achieve an at best transitory cessation of hostilities even if Palestinian Authority President Abbas were in control of the Palestinians. He is not. Hamas (meaning “Islamic Resistance Movement”), a rival Palestinian organization that controls Gaza, represents far too many Palestinians to ignore and has consistently opposed even fits and starts by Abbas sort of, maybe, to consider concessions to Israel. Seventy-nine years old, in failing health and opposed even within the Palestinian Authority, he would not be able to contribute effectively to peace even if he wanted to do so. It is questionable that he does.

Secretary Kerry should abandon the Israel-Palestinian “peace process” before he makes the situation worse than he already has. Perhaps leaving on his yacht for a pleasant sail in Venezuelan waters might do less damage. 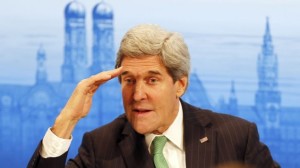 I was graduated from Yale University in 1963 with a B.A. in economics and from the University of Virginia School of law, where I was the notes editor of the Virginia Law Review in 1966. Following four years of active duty with the Army JAG Corps, with two tours in Korea, I entered private practice in Washington, D.C. specializing in communications law. I retired in 1996 to sail with my wife, Jeanie, on our sailboat Namaste to and in the Caribbean. In 2002, we settled in the Republic of Panama and live in a very rural area up in the mountains. I have contributed to Pajamas Media and Pajamas Tatler. In addition to my own blog, Dan Miller in Panama, I an an editor of Warsclerotic and contribute to China Daily Mail when I have something to write about North Korea.
View all posts by danmillerinpanama →
This entry was posted in Abbas, Appeasement, Arafat, Farce, Fatah, Foreign policy, Formerly Great Britain, Germany, Hamas, Hatred, History, Hitler's Germany, Islamists, Israel, Jewophobia, John Kerry, Maduro, Middle East, Obama, Palestinian Authority, Palestinian heroes, United States of Obama and tagged Hamas, Hatred, Israel, John Kerry, Kerry, Palestinian Authority, Palestinians, Peace Process. Bookmark the permalink.

8 Responses to Secretary Kerry and his Israel – Palestinian “peace process”