Posted on 27 April 2014 by danmillerinpanama

President Obama’s renowned grasp of, and historic successes in, foreign policy show that He is the Strongest and Bestest little President ever! 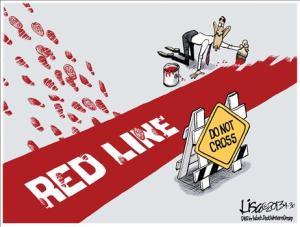 President Barack Humble Obama, pausing briefly in South Korea during the second leg of His tour of Asia to reassure our allies that He has their backs, gave a strong warning to North Korea against conducting a fourth nuclear test while He was in Seoul. Since no test occurred during His visit, it is beyond dispute that North Korea’s Dear Leader Kim Chi-un fears Him greatly. Kim’s fears are totally justified.

SEOUL – President Obama arrived in Seoul on Friday to news that North Korea may be counting down to a nuclear weapons test.

Such moves out of Pyongyang are no surprise and are typical behavior for the North, Obama told reporters while in Tokyo, his previous stop on his Asia trip.

The President said he was prepared to deliver a firm response if a test is conducted during his visit. 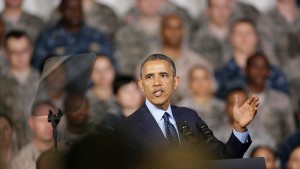 While showing the palm of His very own left hand with which He is prepared to spank Kim Chi-un’s butt, He reminded him of other aspects of His equally fearsome might:

The North appears to be making preparations for a nuclear test — its fourth — despite stringent sanctions imposed by the international community.“Anybody can make threats. That does not make you strong. Those things don’t come through force, they have to be earned.”  [Emphasis added.]

Although President Obama’s remarks on threats, strength and earning “those things” make little sense in English, it is hoped that they will become self-evidently clear when translated into Hangul for Mr. Kim.

“We don’t hesitate to use our military might to defend our allies and our way of life,” he told cheering troops and air force personnel.

President Obama made His threats following a video conference, shown below, with His chief military and spiritual adviser. 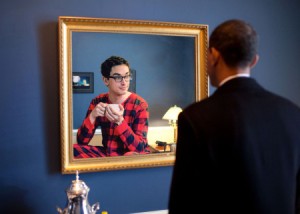 During an interview with South Korea’s JoongAng Ilbo, President Obama also made it perfectly clear that if North Korea dared to test a nuclear weapon while He was in Seoul, He would expect, but not rely solely on, “a firm response from the international community.” During His entire presidency, His own response has always been to paint red lines and to stick to them consistently until He does not have to any more.

At a joint news conference later Friday with South Korean President Park Geun-hye, President Obama proclaimed that His commitment to watching her backside will never waiver while they stand shoulder to shoulder against North Korean and even Chinese provocations. Indeed, He promised that they will stand back to back and shoulder to shoulder even as they go cheek to jowl with the forces of evil. He rejected as sexist North Korea’s claims that

Park Geun-Hye’s recent behaviour with Obama was like a mean, immature girl begging gangsters to beat up someone she does not like . . . .[She is] a crafty prostitute eagerly trying to frame someone by giving her body to a powerful pimp. . . .

President Obama made a timely reference to possible Chinese and North Korean involvement in the recent sinking of a South Korean ferry en route to Jeju do, one of the many islands over which China has claimed sovereignty. Pointing to what He deems the most credible information available from His intelligence community permanently stationed in Washington, He hinted that the disgraced ferry captain might have been a North Korean plant whom China had assisted in securing his unwarranted position of trust.

During His stop in Tokyo before going to Seoul, President Obama had been

pressed on whether he would use military force to defend an obscure set of islands controlled by Japan that are at the heart of a heated regional dispute with China.

He said the U.S. security pact with Japan does extend to the islands — known as Diaoyu to the Chinese — and insisted his implicit offer to defend them against any Chinese incursion did not amount to drawing a red line around the contested land. [Emphasis added.]

“The treaty between the U.S. and Japan preceded my birth, so this isn’t a red line that I’m drawing,” Obama said. “There’s no shift in position, no red line. Were simply applying the treaty.”

The group of islands and rocks jutting out of the ocean is tiny and uninhabited. But the longstanding dispute over them has sent tempers flaring in Beijing and Tokyo, especially in recent years.

The area around them in the South China Sea between Taiwan and Okinawa is believed to be rich in oil resources.

Senkaku is administered by the Japanese, but the Chinese say they are the rightful owners.

Despite shared strong concerns about other aspects of China’s air defense zone in the East China Sea and even involving the Moon, as well as her claimed development of an aerospace fighter able to reach the United States in one hour, both President Obama and President Park reaffirmed their interest in building mutually productive ties with Beijing. They hope thereby to ease tensions between Korea and Japan caused by Japan’s persistent refusals to account and apologize for its incredibly offensive ageist, racist and even homophobic use of only young Chinese and Korean girls as sex slaves (comfort companions) when Japan dominated the entire region from 1910 to 1945. President Obama, who demands and gets complete accountability from His very own Government, said that a clear and final Japanese accounting is necessary and that the best and brightest from His personal Government Accountability Office (GAO) will soon be dispatched to Tokyo.

Notwithstanding this and other encouraging developments, it has been reported that Japan recently imposed draconian sanctions on China for apparently unrelated reasons.

The dispute between China and Japan showed no signs of abatement yesterday, after Japan was reported by domestic media to have taken steps to ban the export of specialist pornography to China.

The move, believed to be in retaliation for China’s seizure of a Japanese cargo ship, is said to have “devastated” netizens across China. 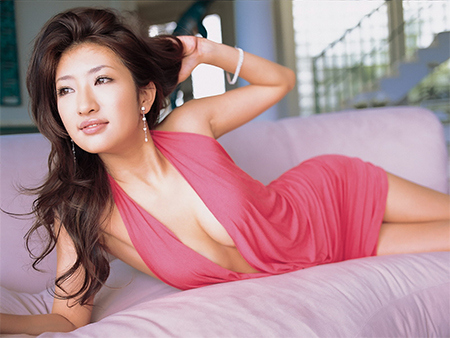 Pornography is commonly found across the Internet but Japan has cornered the market in the refinement and production of so-called “rare” pornography, a vital ingredient in modern Chinese web-viewing habits.

Reuters reported that Japan was declining exports in the 2 Girls, 1 Cup series to Chinese ports, though customs officials were quick to claim the stoppage was in fact due to “stringent quality-control issues.”

President Obama is now in Malaysia, where he intends to hold talks and attend a state dinner with King Yang di-Pertuan Agong Tuanku Abdul Halim Mu’adzam Shah Tuanku Abdul, Prime Minister Datuk Seri Najib Razak, Raja Permaisuri Agong, Tuanku Hajah Haminah and possibly some of their wives. Obama will be the first President of the United States of Obama not only to bow to, but perhaps even to squat for dinner with, a Malaysia King, Prime Minister and other Malaysians honored to dine with Him. President Obama politely declined gracious offers to fly Him home gratis on one of Malaysian Airlines’ fine aircraft as He prepared to return to Washington on Air Force One because it emits fewer climate-endangering gasses.

This is Obama’s fifth visit to Asia since taking office in 2009. Even as He cuts defense budgets to and through the bone to provide for more foreign and domestic equality, social justice and happiness, He promised to make the Pacific region a far greater economic, diplomatic and military priority for the United States than ever before.

Fortunately, despite a few minor provocations with which Secretary Kerry is dealing exceptionally well, there are no longer any seriously problematical relations between the United States of Obama and Russia. They warmed considerably during President Obama’s and President Putin’s recent therapy session with Dr. Phil.

President Obama is considering similar therapy sessions with Kim Chi-un and with whoever may be China’s Dear Leader whenever He manages to take time away from His other pressing duties. President Obama has expressed great confidence that in the interim, with minor assistance from His leading expert on the magical reality of foreign policy, Secretary Kerry, everything will be A-OK. President Obama’s own superior intellect, combined with His unequaled powers of persuasion and comparable perceptions of reality, will bring true peace to the entire world. That will surely be His uniquely great legacy, far surpassing the meager legacies of all former and future world leaders.

I was graduated from Yale University in 1963 with a B.A. in economics and from the University of Virginia School of law, where I was the notes editor of the Virginia Law Review in 1966. Following four years of active duty with the Army JAG Corps, with two tours in Korea, I entered private practice in Washington, D.C. specializing in communications law. I retired in 1996 to sail with my wife, Jeanie, on our sailboat Namaste to and in the Caribbean. In 2002, we settled in the Republic of Panama and live in a very rural area up in the mountains. I have contributed to Pajamas Media and Pajamas Tatler. In addition to my own blog, Dan Miller in Panama, I an an editor of Warsclerotic and contribute to China Daily Mail when I have something to write about North Korea.
View all posts by danmillerinpanama →
This entry was posted in Ageism, Atomic bomb, China, Climate change, Comfort companions, Commander in Chief, Equality, Fantasy, Foreign policy, Global Smarming, Government Accountability Office, Homophobia, Humor, Kim Chi-un, Kim Jong-un, Libruls, North Korea, North Korea's nukes, Obama, Obama's America Now, Peace and Love, Retaliation by North Korea, Russia, Sanctions, Satire, travel, U.S. Military, Ukraine, United States of Obama and tagged Ageism, China, Homophobia, Japan, Korea, Malaysia, obama, Racism, Satire. Bookmark the permalink.

3 Responses to Obama shows His remarkable Strength during Asian pivot