Israel should banish those who try to murder her

Posted on 6 July 2014 by danmillerinpanama

Palestinian Islamists want to eliminate Israel. As Palestinians riot, injure and murder Israeli civilians, it has been urged that Israelis turn the other cheek and go calmly about their business. How sweet!

Sweets for the sweet

An article at The Jerusalem Post is titled Comment: Facing the ugly truth. It notes that after the murders of three Israeli teens by Palestinian heroes, Israeli vigilantes may have sought revenge by murdering a Palestinian boy. Murder, favored by Palestinians, is not and should not be the Israeli way.

According to PM Netanyahu,

“I would like to send my condolences to the Abu Khder family. I pledge that the perpetrators of this horrific crime, which must be resolutely condemned in the most forceful language. I pledge that the perpetrators of this horrific crime will face the full weight of the law. I know that in our society, the society of Israel, there is no place for such murderers. And that’s the difference between us and our neighbors. They consider murderers to be heroes. They name public squares after them. We don’t. We condemn them and we put them on trial and we’ll put them in prison.[Emphasis added.]

“And that’s not the only difference. While we put these murderers on trial, in the Palestinian Authority, there is continuous incitement for the destruction of the State of Israel. It’s a staple of the official media and the educational system. [Emphasis added.]

It seems unlikely that the family of Mohammed Khder will appreciate the phrasing of PM Netanyahu’s condolences or that many Palestinian terrorists will change their perspectives and ways because of them.

Although vigilante action by Israelis is bad, they are human and it is quite understandable: with rockets being fired frequently into Israel from Gaza, continuing and escalating Palestinian rioting, arson and physical assaults, many are rightfully upset. The linked Jerusalem Post article offers this advice:

The fact that Arab society still doesn’t know how to express itself without violence is an issue that only they can deal with, if they so choose. [Emphasis added.]

Does anyone else remember the advice given years ago to school kids on what to do during a nuclear attack? 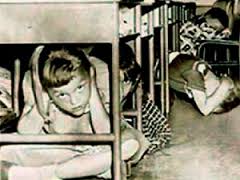 It would not have been effective, but there was nothing the kids could have done that would have been. The situation with Israel is different. Should Israelis hide under their desks to await the happy day when their Arab neighbors choose voluntarily to reject violence? Palestinian Arabs — sixty percent of whom have the destruction of Israel as a five year national goal — are highly unlikely to do that. It is equally reasonable to await the happy day when a virulent cancer chooses, voluntarily, to stop metastasizing and get along peacefully within its host’s body. Unless and until ways are found to isolate and then remove violent Palestinians from Israel and keep them out, that cancer will continue to metastasize until Israel dies a lingering and painful death.

In March of 2011, I wrote an article at PJ Tatler titled Palestinian heroes are little worse than venomous snakes. It noted the then recent slaughter of members of the Fogel family in Itamar and satirically offered advice not radically different from that recently given in the linked Jerusalem Post article. Here’s an excerpt:

The many heroes of Palestine have for too long been disparaged in the media.  While these heroes’ efforts to produce true peace will not likely be effective other than for the few Israelis noted above, I look forward to viewing, at YouTube and elsewhere, videos showing the peacefully joyous reactions  of these

residents from the southern city of Rafah [who] hit the streets Saturday to celebrate the terror attack in the West Bank settlement of Itamar where five family members were murdered in their sleep, including three children.

Residents handed out candy and sweets, one resident saying the joy “is a natural response to the harm settlers inflict on the Palestinian residents in the West Bank.”

Back to my PJ Tatler article,

This brings me to the venomous snakes which want to come into our yard to play with us and with our puppies. In many respects like Palestinian heroes, these pitiably downtrodden snakes are peaceful beings; unless hungry and wanting to assert their natural rights to food, or disturbed after asserting those rights and then merely wanting to relax and bask in the warm sunlight as they also have every right to do, they are harmless. Yet I have sometimes sinned by trying to drive them away or even to kill them (the snakes). May Allah – whose beloved children we all are – hear my confession and have mercy upon me.

Having learned much from Dear Leader Obama, I have resolved to give peace a chance. I am eliminating all remaining (but fortunately ineffective) barriers to snake entry and otherwise making them feel as welcome as my own brothers and sisters. Given enough warmth, affection and puppies to kill they could easily become loyal comrades to comfort me as I slide even further into librul senility.

To help others to understand, and to persuade them to support, my worthy goal of peaceful coexistence, I am hereby demanding that the malicious stories about venomous snakes be removed from all media, that health agencies cease instructing on the prevention and treatment of snakebites and that all schools everywhere revise their curricula to focus, instead of on their own warped misconceptions, on the great good done by our peaceful friends, the venomous snakes. To do other than welcome and provide for them would destroy the peace process I am trying so hard to initiate and to make work.

Despite President Obama’s wise counsel, which I have taken to heart, Israel continues obdurately to pursue her racist and discriminatory follies. If she is to become a civilized, appropriately diverse (but  very small) and therefore peaceful country, she must accept our great president’s enlightened wisdom and do as he has tried so hard to persuade her to do. Israel, in her uniquely contumacious way, has yet to yield. Not once in recent memory has a President of Israel even bowed to a Palestinian statesman!

Israel probably has more Palestinian heroes with whom to deal than I have snakes; the snakes may well be less aggressive and dangerous. Nevertheless, since in my own small way I am making similar efforts with snakes, Israel can do even more.

The situation has worsened since early 2011. The Kerry – Obama – Abbas – Netanyahu “peace process” failed because, with Israel’s “peace partner(s),” it could not have been otherwise. Palestinian violence has increased, as it was no less likely to do if the “peace process” had succeeded.

I do not know how, under Israeli law, to get rid of violent Palestinians and thereafter to keep them out. If there are lawful ways to imprison them for many years (without compensation being paid to them or to their families by the Palestinian Authority or others) and then to banish them from Israel and prevent them from returning, that should be done. If not, the laws should be changed.

Taking such steps would likely cause the “international community” to become even more hostile to Israel than at present. Which is worse? Continuing to try to live peacefully and productively in a snake pit, or tolerating increased international displeasure? Israel may well have to make that unpleasant choice.

I was graduated from Yale University in 1963 with a B.A. in economics and from the University of Virginia School of law, where I was the notes editor of the Virginia Law Review in 1966. Following four years of active duty with the Army JAG Corps, with two tours in Korea, I entered private practice in Washington, D.C. specializing in communications law. I retired in 1996 to sail with my wife, Jeanie, on our sailboat Namaste to and in the Caribbean. In 2002, we settled in the Republic of Panama and live in a very rural area up in the mountains. I have contributed to Pajamas Media and Pajamas Tatler. In addition to my own blog, Dan Miller in Panama, I an an editor of Warsclerotic and contribute to China Daily Mail when I have something to write about North Korea.
View all posts by danmillerinpanama →
This entry was posted in Abbas, Antisemitism, Appeasement, Border closings, Brutality, Culture of violence, Deportation, Fogel Family, Freedom, Hamas, Islamic rage, Islamists, Israel, Jewophobia, Jews, John Kerry, Libruls, Middle East, Murder, Muslims, Netanyahu, Obama, Palestinian heroes, Peace process, Propaganda, Snakes and tagged Expulsion, Israel, Jihad, Murder, Vigilantes. Bookmark the permalink.