Posted on 22 September 2014 by danmillerinpanama

Princess was eight years old and a wonderful companion. She had been declining, reviving and again declining for the past several months, despite substantial veterinary attention. Last night she refused to eat or drink and died at about 10:30 this morning. 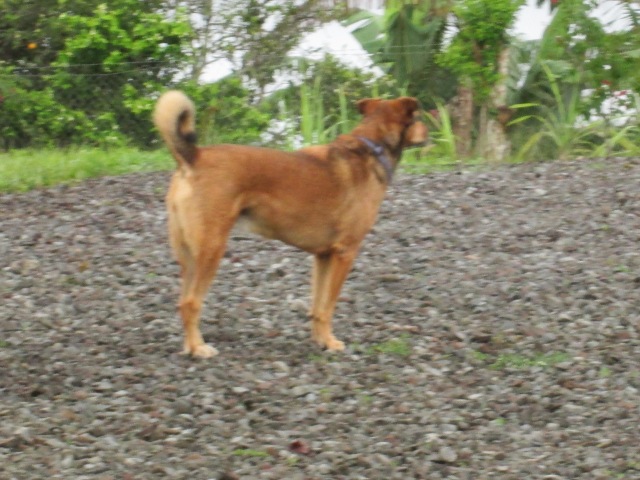 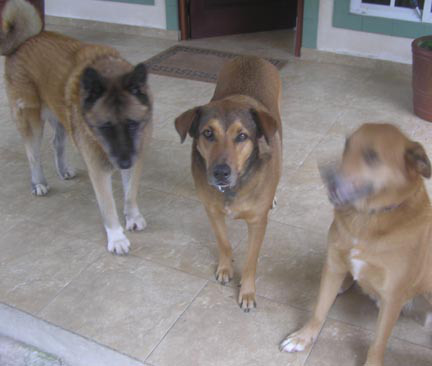 Princess is in the middle.

Princess became my favorite of all our dogs, past and present. She was attentive to my needs and concerned about me. As I became increasingly infirm with age and had difficulty descending the two steps to go from our house to my wife’s separate but adjacent art studio to activate our internet connection, Princess noticed my difficulty. She accompanied me to the steps and positioned herself at my side so that I could lean on her. Shortly thereafter, she noticed that I also had difficulty ascending the two steps to Jeanie’s art studio and positioned herself at the top for me to lean on. Despite her illness, Princess tried her best to do the same until a couple of days ago.

Jeanie and I will bury Princess later this afternoon next to the grave of Shadow, who died from the bite of a venomous snake in 2006; Shadow’s breeder gave Princess to us when we told her of Shadow’s death.

Shadow was also a wonderful pup and died at the very young age of three. Jeanie and I still grieve for her and her photo has long been the graphic on my computer desktop. Not a day passes when I do not look at her grave and wish her good morning or good afternoon. As soon as I figure out how to do it, I will put pictures of them both on my desktop.

Due to Princess’ death, I am more than a little disconsolate and hope that readers will excuse my absence for a day or two. Little beyond Princess’ death matters to me at this point and perhaps writing this may be something of a catharsis. After we bury Princess, I shall seek solace in a substantial tot or more of rum.

I was graduated from Yale University in 1963 with a B.A. in economics and from the University of Virginia School of law, where I was the notes editor of the Virginia Law Review in 1966. Following four years of active duty with the Army JAG Corps, with two tours in Korea, I entered private practice in Washington, D.C. specializing in communications law. I retired in 1996 to sail with my wife, Jeanie, on our sailboat Namaste to and in the Caribbean. In 2002, we settled in the Republic of Panama and live in a very rural area up in the mountains. I have contributed to Pajamas Media and Pajamas Tatler. In addition to my own blog, Dan Miller in Panama, I an an editor of Warsclerotic and contribute to China Daily Mail when I have something to write about North Korea.
View all posts by danmillerinpanama →
This entry was posted in Death of my best friend and tagged Death of a best friend. Bookmark the permalink.