Posted on 31 October 2014 by danmillerinpanama

It’s easy: register and vote Democrat. That will ensure that your vote is counted, ease the burdens on hard-working voting machines and prevent your vote from being countered by the unlawful vote of someone who is not a U.S. citizen or is dead (or is both). 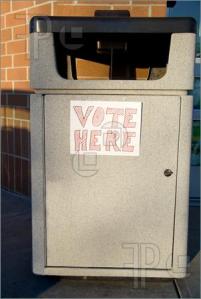 We have all read the news about “mis-calibrated” voting machines that automatically cast votes for Dims and the encouragements given to critters who are not U.S. citizens to vote. If you simply vote Dim, that is not a concern; its “good” to cheat for Dims because Dims are “good.”

Dead people can vote because it’s their right.

Another species of election fraud?

My wife and I live in the rural highlands of the Republic of Panama and vote via absentee ballot in a County of our last State of residence, Maryland. In accordance with instructions provided by the County electoral commission we requested, individually, that our absentee ballots be posted on the County’s website and that we be sent e-mail notifications of the passwords we would need to get them. After ten days we had heard nothing.

Oh. Did I mention that, in response to a question on the ballot request, we confessed to the egregious sin of being registered Republicans?

After waiting ten days, we jointly called the County election office and eventually spoke with a pleasant young man who checked and told us that neither of our ballot requests had been received. He then transferred our call to a pleasant young woman at the Ztate level. She checked and confirmed what the County guy had said. She then suggested that we email, again but directly to her, our earlier ballot requests. We forwarded our earlier (October 13th) e-mails with their attached ballot requests and, within a very few minutes she sent e-mails noting that both had been received. One day later, our ballots were available on the website. We retrieved them, voted (Republican) and on November 29th sent them by registered, traceable mail from the city of David, here in Panama. They should arrive well before the due date, November 14th. We should be able to determine from the State website whether our ballots were received and counted. We will probably never know for whom they were counted as having been cast.

Had we not bothered to check, we would not have been able to vote. A simple solution might be to demand that the U.S. Department of Justice prosecute for election fraud. That’s so simple that it hasn’t a chance of working: even if the Department were so inclined, it is too busy fomenting racial rest, helping illegal aliens, investigating conservatives and other Dim stuff. So, register Democrat in advance of the next election. If it is necessary to be a registered Republican in order to vote in a Republican primary, wait until after you have cast your primary vote and then switch, promptly, to Democrat.

Vote Democrat? I was just joking. Even though it’s often difficult to find a Republican candidate worth voting for, even a RINO would be better than a DIM.

I was graduated from Yale University in 1963 with a B.A. in economics and from the University of Virginia School of law, where I was the notes editor of the Virginia Law Review in 1966. Following four years of active duty with the Army JAG Corps, with two tours in Korea, I entered private practice in Washington, D.C. specializing in communications law. I retired in 1996 to sail with my wife, Jeanie, on our sailboat Namaste to and in the Caribbean. In 2002, we settled in the Republic of Panama and live in a very rural area up in the mountains. I have contributed to Pajamas Media and Pajamas Tatler. In addition to my own blog, Dan Miller in Panama, I an an editor of Warsclerotic and contribute to China Daily Mail when I have something to write about North Korea.
View all posts by danmillerinpanama →
This entry was posted in 2014, Democrats, electoral fraud, Maryland, Obama, Obama Ohio Speech, Republicans, RINOs, Voting fraud and tagged Democrats, Electoral fraud, Maryland, Republicans, RINOs, Voting fraud. Bookmark the permalink.

2 Responses to Make your vote count