Can executive amnesty for illegals be killed by Congress?

Posted on 6 November 2014 by danmillerinpanama

What Obama intends to do by His royal decree on amnesty for illegal aliens is murky at best. Here, however, are a few thoughts. 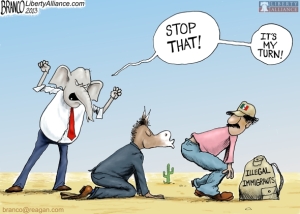 During His November 5th press conference, Obama declined to provide significant details about His contemplated Royal decree on immigration “reform.”

Jeff, you know, I think if you want to get into the details of it, I suspect that when I announce that executive action, it’ll be bright full of detail.”

That’s similar to former House Speaker Pelosi’s “we have to pass the [health care] bill so that you can find out what’s in it….” However, before the ObamaCare legislation passed we had an idea what it said. Then we had to wait for several years for the multiple Federal agencies charged with implementing it to tell us what it meant to them and then for the courts to decide whether they were correct.

On immigration, I know that concerns have been expressed that, well, if you do something through executive actions, even if it’s within your own authorities, that that will make it harder to pass immigration reform. I just have to remind everybody, I’ve heard that argument now for a couple of years. This is an issue I actually wanted to get done in my first term. And we didn’t see legislative action. [Emphasis added.]

Not even with solid Democrat majorities in both houses?

And in my second term, I made it my top legislative priority. We got really good work done by a bipartisan group of senators, but it froze up in the House. And, you know, I think that the best way, if folks are serious about getting immigration reform done, is going ahead and passing a bill and getting it to my desk. [Emphasis added.]

And then the executive actions that I take go away. They’re superseded by the law that is passed. And I will engage any member of Congress who’s interested in this in how we can shape legislation that will be a significant improvement over the existing system. But what we can’t do is just keep on waiting. There is a cost to waiting. There’s a cost to our economy. It means that resources are misallocated. [Emphasis added.]

Any chance that a “comprehensive” immigration bill that might pass both houses of the current Congress would pass the next congress, to convene in January, seems remote. That’s probably the basis of Obama’s sense of urgency in getting it done now. If legislation did pass and Obama did not like enough of it, He would veto it. And that brings us to this: “And then the executive actions that I take go away. They’re superseded by the law that is passed.” However, no legislation that Obama vetoes would make His executive actions “go away.”

Were Obama to sign legislation, parts of which He does not like but which He thinks are the best He can get or which He plans to ignore, executive amnesty already granted to several million illegal aliens would not “go away,” poof. The Obama Justice Department would very likely go to Federal court, seek and get restraining orders on any attempt to make Executive amnesty “go away” via parts of the law that He does not like and therefore refuses to enforce. As I wrote at PJ Media in April of 2011, we learned in the 9th Circuit decision in United States v. State of Arizona that enforcement of Federal immigration laws is the exclusive prerogative of the Federal Government– even when it chooses not to enforce them. As Judge Bea said in his dissent,

The majority’s arguments regarding how any of the state officers’ actions spelled out in Section 2(B) could interfere with federal immigration enforcement is consistent with only one premise: the complaining federal authorities do not want to enforce the immigration laws regarding the presence of illegal aliens, and do not want any help from the state of Arizona that would pressure federal officers to have to enforce those immigration laws. With respect, regardless what may be the intent of the Executive, I cannot accept this premise as accurately expressing the intent of Congress. (emphasis in original)

Arizona had taken the lead, in 2010, in a renewed effort by states to adopt policies that would control many of the aspects of the daily lives of hundreds of thousands of immigrants who had entered the U.S. without legal permission to do so. The law has been challenged by various civil rights groups as a form of racial bias, but that was not an issue before the Supreme Court. The law also had been challenged by the federal government as unconstitutional, on the theory that Arizona was trying to move in on the federal government’s superior power to enforce federal immigration laws. That is the challenge that the Court decided Thursday. In the end, by a vote of 5-3, the Court nullified three of the four provisions because they either operated in areas solely controlled by federal policy, or they interfered with federal enforcement efforts. Nullified were sections making it a crime to be in Arizona without legal papers, making it a crime to apply for or get a job in the state, or allowing police to arrest individuals who had committed crimes that could lead to their deportation. The Court left intact — but subject to later challenges in lower courts — a provision requiring police to arrest and hold anyone they believe has committed a crime and whom they think is in the country illegally, and holding them until their immigration status could be checked with federal officials.

The Arizona case involved Federal Statutes. Since the Executive Branch and its multiple Federal agencies — not the Congress — are in charge of immigration law enforcement, it seems likely that the Supreme Court, after years of litigation, would hold that enforcement and non-enforcement of legislation passed by the Congress and signed by the President are up to the Executive branch — even when the Executive branch refuses to enforce parts of the legislation because Obama does not like them. That’s what happened with the Arizona statute.

Perhaps the current Congress will sing Kumbaya and pass “comprehensive” immigration reform that Obama will like.

Were the next Congress to pass legislation to kill His Royal decree, Obama would veto it and His Royal decree would remain in effect. Perhaps then the only viable means of attack would be for the Congress to refuse to fund pertinent Federal projects.

Unfortunately, it now appears that an omnibus funding bill will pass during the current Congress unless there is sufficient opposition from conservatives and perhaps others, particularly if Obama’s Executive decree on immigration is issued before the funding vote.

What does Chris Matthews say?

Bryan Preston at PJ Tatler had this to say about Matthews’ remarks:

Matthews, an old school Democrat who may hate Republicans but still values the Constitution and the two-party system, gets a lot right in that segment, but he still fails to realize one thing. Obama wants and must have confrontation. He was never interested in being president of all of America. Compromise is not in his make-up. It’s just not there. Those of us who oppose Obama’s agenda, and that may now include some Democrats, are illegitimate to him. So is the Constitution with its restraints on his power. [Emphasis added.]

The trained community organizer has to have division in order to generate anger and get his way. The collision that Matthews fears, Obama embraces.

I was graduated from Yale University in 1963 with a B.A. in economics and from the University of Virginia School of law, where I was the notes editor of the Virginia Law Review in 1966. Following four years of active duty with the Army JAG Corps, with two tours in Korea, I entered private practice in Washington, D.C. specializing in communications law. I retired in 1996 to sail with my wife, Jeanie, on our sailboat Namaste to and in the Caribbean. In 2002, we settled in the Republic of Panama and live in a very rural area up in the mountains. I have contributed to Pajamas Media and Pajamas Tatler. In addition to my own blog, Dan Miller in Panama, I an an editor of Warsclerotic and contribute to China Daily Mail when I have something to write about North Korea.
View all posts by danmillerinpanama →
This entry was posted in 2014, Abuse of Power, Administrative Agencies, Appeasement, Congress, Conservatives, Constitution, Courts, Democracy, Democrats, Domestic policies, Executive Decree, Executive Order, Freedom, Leftists, Multicuralism, Obama, Obama Dream Order, Obama's America Now, Politics, Uncategorized and tagged Congress, Courts, Executive Order, Illegal Immigration, obama. Bookmark the permalink.

6 Responses to Can executive amnesty for illegals be killed by Congress?