A thought experiment about Islam

Posted on 15 January 2015 by danmillerinpanama

A religion which blesses and encourages the slaughter of those who offend it or its “prophet” should be condemned, not praised, unless and until it stops doing both.

On January 14th, I posted an article titled Obama plans to restrain media offensiveness to Islam. As a thought experiment, this less than obviously relevant cartoon appeared at the top: 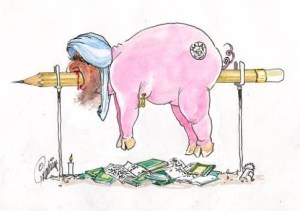 I considered the cartoon offensive and hope that everyone else did too. It might depict Mohamed, or it might not. Beyond vague descriptions, likely of questionable value, we have little information about Mohamed’s physical appearance. The cartoon could depict any obese human male wearing a turban. The same is true of other cartoons purporting to depict Mohamed in various poses.

Had a similar cartoon shown instead a Roman Catholic priest or a rabbi on a roasting spit, with a giant pencil extending into his anus and thence through his body and mouth, present day Christians, Jews and those of most other world religions, as well as those of no religion, would quite likely be offended; far less because of the religious significance of the victim than because we do not do that sort of thing to people. We would not on either account murder the cartoonist. Many Muslims might well consider the cartoon funny and approve of what they consider an appropriate consequence of being Jewish or Christian.

Other Mohamed cartoons of which I am aware do not show him being killed or tortured. For example this cartoon, which inspired the vicious animosity of many Muslims, merely depicts him with a bomb in his turban and gazing with hatred at someone or some thing. It does not depict him being tortured or killed.

Rather than consider it offensive, I consider it a humorous way of depicting one (of the many) barbaric things done by Muslims in the name, and with the blessing, of their religion. Current day non-Muslims also use bombs and some of the same weapons. They use more advanced weapons as well. However, they do not generally do it in the name and with the blessings of their religions because of what they perceive as insults to those religions. That is a significant difference.

Modern cultures should not seek to prevent the publication of cartoons presenting Mohamed, or anyone else, in an unfavorable light. Nor should they seek to prevent cartoons of the objectionable type I posted on January 14th. They can also generate controversy and, hopefully, peaceful discussion. A cartoon of the sort suggested above, depicting a Roman Catholic priest or Jewish rabbi instead of Mohamed, probably would generate nothing more than peaceful controversy, aside from the pleasure of some Muslims.

If cartoons cause bad people to kill those who create or publish them, all of the subsequent adverse consequences should befall those who kill, not those who would create or publish more cartoons. Obama is intent upon imposing adverse consequences on the latter, while claiming that those who kill or attempt to kill in the name of Allah act on behalf of no religion. He would, and would have the rest of us, shield the murderers’ coreligionist supporters even from our displeasure. Obama is a disgrace to civilized humanity.

5 Responses to A thought experiment about Islam