Posted on 6 February 2015 by danmillerinpanama

Although it would be hypocritical for NBC to fire Mr. Williams for  lying, it would enhance his chances of becoming our next Secretary of State. Like Hillary Clinton, Williams sorta told some truth when he admitted to lying for a dozen years. Hillary became Obama’s Secretary of State in 2009. Williams, also a very good liar, deserves no less this year. After that? Perhaps “our” next President.

Here is a timeline of the progression of Williams’ tall tales, based on a Stars and Stripes article:

In late March 2003, the New York Daily News reported that “the one (helicopter) carrying Williams and (Retired General and current NBC consultant Wayne) Downing landed” after another chopper ahead of them had been hit by “a rocket-fired grenade.” Even this early report appears to have been exaggerated. Larry O’Connor at Truth Revolt, reacting to Williams’ on-air statement Wednesday night, noted that Williams was really “in an aircraft that followed the one hit by RPG fire by an entire hour.”

Several days later, USA Today reported that Williams “was stranded in the Iraqi desert for three days.” That hardly appears to be the case. In a comment at an NBC Facebook page, a clearly frustrated Lance Reynolds, the flight engineer on the helicopter that was hit, wrote: “I remember you guys taking back off in a different flight of Chinooks from another unit and heading to Kuwait to report your ‘war story’ to the Nightly News.”

By 2007, the helicopter that was hit was, according to a Williams blog entry, “the chopper flying in front of ours.” A University of Notre Dame press release in 2010, the year he gave the commencement address there, referred to how “the lead helicopter was shot down.”

In March 2013, Williams told Alec Baldwin of “being in a helicopter I had no business being in in Iraq with rounds coming into the airframe,” and, after prompting, said that he “briefly” thought he would die.

Later that month, Williams crossed the fairy-tale Rubicon, telling David Letterman that “two of the four helicopters were hit by ground fire, including the one I was in,” and that after that, the problem was how “we figure out how to land.” We?

Finally, on January 30, Williams, applying even more mustard, told the nation on Nightly News that “the helicopter we were travelling in was forced down after being hit by an RPG.”

The indispensable Kristinn Taylor at Gateway Pundit has found that “speech promotional bios touted Williams’ bravery in returning to Iraq after he claimed being under fire.”

Here’s a video of Williams’ 2013 love feast with David Letterman. His Iraq narrative begins at 2:50.

According to Sharyl Attkisson, Presidential Candidate Clinton [like Brian Williams],

never fully explained how she could have made such a mistake as saying she had ducked sniper fire when there hadn’t been a sniper in sight. Initially, she stated “I was sleep deprived and I misspoke.”

But as my report below (“Clinton Doubles Down”) shows, Clinton told varieties of the embellishment over a long period of time, not just when she was sleep deprived.

Had Clinton somehow convinced herself that it had all really happened? Or did she knowingly advance a false story?

“So I made a mistake,” Clinton also stated at one point. “It proves I’m human, which you know, for some people, is a revelation.” 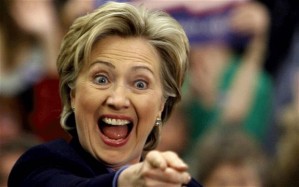 In the next video, Mr. Williams and a guest from NBC discuss Clinton’s Bosnia adventures, Senator Obama’s candidacy and their anticipated consequences for her 2008 Democrat presidential nomination. Note the apparent puzzlement about why Clinton confessed to having “misspoken.”

Clinton didn’t get the Democrat presidential nomination in 2008 but was confirmed as Obama’s Secretary of State in 2009. Doesn’t Williams deserve a promotion comparable to what Clinton got (from failed Presidential Candidate to SecState)? Shouldn’t he be held to the same standard?

Williams had seen what happened to Clinton just weeks earlier, yet kept telling his own fish tale. To paraphrase one of his own NBC colleagues, this isn’t Little League, it’s a nightly news anchor with an audience of millions. Will he be held to the same standards to which NBC and the rest of the media held Clinton?

What standards were those then and, of more importance, what have they been since? She still “deserves” to become “our” next President.

Tom Brokaw, also of NBC, contends that Williams should go. Perhaps, however, NBC will forgive and forget.

The Los Angeles Times, quoting anonymous NBC News execs, reported that Williams’s on-air apology has been accepted internally and that he’s expected to face no disciplinary action for his serious journalistic lapse, which included showing video of a combat-damaged helicopter and representing it wrongly as the Chinook on which Williams had been a passenger.

As noted by Howard Kurtz at Fox News,

When it comes to the NBC franchise, Brian Williams is too big to fail. He’s the face of the network, he hosts the top-rated network newscast, he guest-hosts “Saturday Night Live.” He’s a bankable asset. And in fairness, Williams has a pretty unblemished track record.

Reality is often unpleasant and hard to deal with, so we need a creative Secretary of State who will continue to reject reality, base policy on fantasy and do so with impunity for a decade or more.

Clinton, a likely Presidential Candidate for 2016, did her “best.”

Obama does what Obama does and gets away with it. According to an article at Breitbart, the seven Muslims at a recent White House meeting on domestic and foreign policy issues have been named.

According to a White House statement on the President’s meeting, the domestic issues discussed were the “Affordable Care Act, anti-Muslim violence and discrimination, the 21st Century Policing Task Force, and the upcoming White House Summit on Countering Violence Extremism.” On the foreign policy front, “the President discussed the need to continue countering ISIL and other groups that commit horrific acts of violence, purportedly in the name of Islam,” while also congratulating Muslims on their “remarkable contributions” to America. [Emphasis added.]

Comedian and left-wing pundit Dean Obeidallah revealed that he was one of the fifteen Muslim-American “leaders” brought to the White House on Wednesday afternoon.

“The No.1 issue raised: The alarming rise in anti-Muslim bigotry in America,” Obeidallah said of the meeting with the President. Their chief collective concern was not the rise of the Sunni Islamic State, nor the expansion of the Caliphatist Shiite Iranian regime and its messianic drive towards nuclear weapons, but instead, “anti-Muslim bigotry in America.” [Emphasis added.]

Dean Obeidallah also revealed that Farhana Khera, executive director of Muslim Advocates, was behind the effort to get Muslim leaders to the White House.

Muslim Advocates reveals on its website that its three main objectives are to “end profiling,” “strengthen [Muslim] charities,” and “counter hate.” Its Press Center section is filled with posts demanding intelligence organizations, such as the New York Police Department and federal agencies, end their “Muslim Suspicionless Spying Program,” while also dictating to the media that it should “Report Accurately on Muslims.” Another post reads, “What You Need to Know About the New Federal Racial Profiling Policy.” Review of Muslim Advocates’ press releases reveals that the only foreign policy issue with which the group has concerned itself over the past year was urging Sec. of State John Kerry to ensureMuslim “Americans are able to safely perform the annual religious Hajj pilgrimage in Saudi Arabia.” [Emphasis added.]

Kerry has bravely continued the march.

Williams, who should be rehabilitated as quickly as was Senator Clinton, could not be worse and might even be better than Kerry. Then, his path to the presidency should be clear even if he (unlike Obama) is candid in public on rare occasions.

Hey, Grandpa! I need some of that stuff.