Merry Christmas from the Miller Family

Posted on 25 December 2015 by danmillerinpanama

It’s been a good year for us. Although Jeanie has neglected her painting she has made up for that by singing, a lot. On Christmas Eve, she participated in the Christmas Concert for the community of Boquete and, in addition to being in the chorus, sang four solos. I’ve neglected my blog due to commitments at Warsclerotic, an Israeli aggregator blog. When I post something at my blog relevant to Israel or the Middle East, I cross post it there.

Here is a photo of our worker, Daniel, and his family who came to wish us a Merry Christmas.

Here’s a photo of four of us – Ruff, Dan, Sunshine and Jeanie. Neither of our two remaining horses, Dancer and Daisey, wanted to come into our house to be photographed. 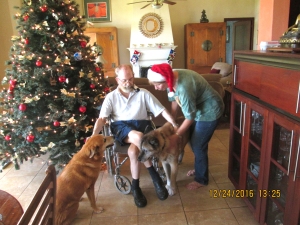 Now for some Christmas music you may not have heard. It’s from Venezuela, where Jeanie and I enjoyed ourselves greatly before El Thugo Chavez came to power in 1998. The prospects there may now be better, but the likelihood that the economy and semblances of freedom and democracy will be restored remains highly questionable.

Venezuelan Christmas tunes, so different and unique from the packaged music that seems to have become the rule elsewhere. A guitar with “Niño Lindo” and Guanaguanare with the original folk composer.

I was graduated from Yale University in 1963 with a B.A. in economics and from the University of Virginia School of law, where I was the notes editor of the Virginia Law Review in 1966. Following four years of active duty with the Army JAG Corps, with two tours in Korea, I entered private practice in Washington, D.C. specializing in communications law. I retired in 1996 to sail with my wife, Jeanie, on our sailboat Namaste to and in the Caribbean. In 2002, we settled in the Republic of Panama and live in a very rural area up in the mountains. I have contributed to Pajamas Media and Pajamas Tatler. In addition to my own blog, Dan Miller in Panama, I an an editor of Warsclerotic and contribute to China Daily Mail when I have something to write about North Korea.
View all posts by danmillerinpanama →
This entry was posted in Merry Christmas! and tagged Merry Christmas. Bookmark the permalink.

8 Responses to Merry Christmas from the Miller Family