Will America Follow Britain further Into, or away from, the Abyss?

Posted on 14 May 2016 by danmillerinpanama

The Muslim invasion is changing European and British demographics to the degree that some countries will soon have Muslim majorities. Will America follow Europe? What about our Publican and Demorat elites? Will we reject them and the unelected bureaucrats they have spawned and empowered?

America needs to vote for her own version of Brexit this November.

Paul Weston is the vile “Islamophobe” who dared to read — aloud and in public — a passage from a book written by another vile “Islamophobe,” Winston Churchill, a couple of years ago. For that, he (Weston, not Winston) was arrested.

So what if Weston spoke accurately? He offended Muslims and that can’t be tolerated. Besides, Britain is terribly “racist” even though Islam is not a race.

Meanwhile, London’s East End is losing its native population and the place looks “less like a British city, more like Baghdad.”

The European Union and Britain

Currently, Mr. Weston of the Liberty GB Party is campaigning for Britain to leave the Europen Union, a force for unrequited love, charity and destruction. So is Nigel Farge of UKIP.

Here’s a long video about the EU and why Britain should leave it. It’s over an hour long but well worth watching. It’s principally about economics, the destructive power the EU has given unaccountable bureaucrats and the stifling of democracy.

As you watch and listen, please consider the similarities and differences between the EU and governance of, by and for the Publican and Demorat Establishment in America. Both have empowered and continue to expand unelected bureaucracies.

I was disappointed that the video does not deal with the immigration problem which will continue to plague Britain if she remains in the EU. Perhaps the topic was seen as likely to displease Britain’s already substantial Muslim population and prompt them to vote to remain in the EU. Remember, London just elected its first Muslim mayor.

Democracy and self-governance are seen by far too many as absurdly old fashioned. In Obama’s America, where would we be if governance were taken away from our betters in the Publican and Demorat Establishment and returned to the vulgarian little people? Do we need great Establishment intellects to think for us so that we don’t have to do it ourselves? The vulgarian dummies living in EU member states haven’t had to think for years. Now, with the upcoming referendum, those in Britain l have a chance to do so. We will have a chance this November.

Obama has told the citizens of once-great Britain that membership in the EU is economically and otherwise good for them — perhaps even as good as His presidency has been for citizens of His America. Many disagree with “the smartest person in any room;” those in Obama’s America who do may even elect Vulgarian-in-Chief Donald Trump as President shortly after citizens of Britain who cherish self-governance may vote to exit the EU.

America does not yet have the same Muslim demographic problems as Europe or Britain. Unless we halt or at least reduce Islamic immigration and cease to subsidize it we will eventually. One way to minimize the problem is to get rid of the politically correct “Islamophobia” nonsense and speak of Islam as it is rather than as though it were a benign unicorn. 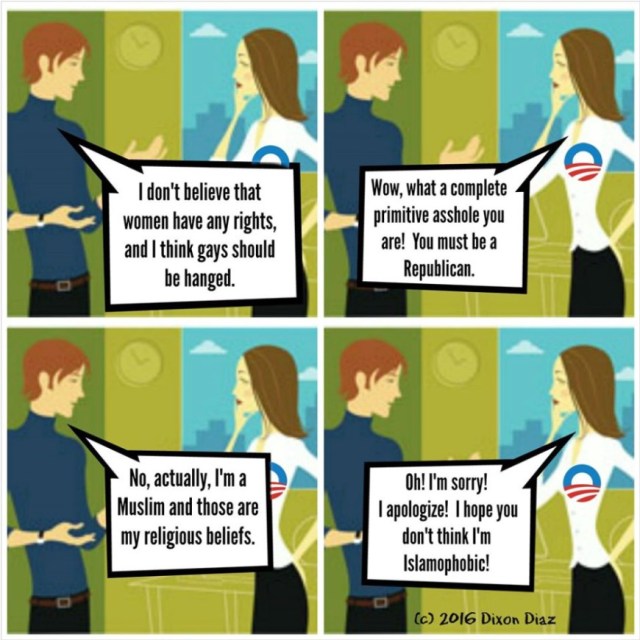 The elites of the Publican and Demorat establishment are a big part if the problem. Just as Britain seems to be moving toward leaving the EU, we need to diminish the power of our own elected elites by electing “vulgarians” to replace them. We also need to reduce the very substantial power of the masses of unelected and unaccountable bureaucrats they have empowered. There is no need to replace them.

8 Responses to Will America Follow Britain further Into, or away from, the Abyss?