Posted on 8 October 2016 by danmillerinpanama

The left apparently believes that the Trump campaign must end in disgrace because, in 2005, Trump was recorded (apparently surreptitiously) bragging in a private conversation with George H.W. Bush’s nephew, Billy Bush, about how he tried (but failed) to get a Hollywood starlet to have sex with him. For shame! Wait a minute. That’s “guy talk” and most healthy males occasionally engage in it when not in mixed company. Methinks I smell a bit of hypocrisy.

“Girl talk?” I don’t know. Do they discuss how sexy voting should be?

Juanita Broaddrick, one of Bill Clinton’s “alleged” rape victims, had this to say about Trump’s words:

“How many times must it be said,” she tweeted Saturday morning.

Broaddrick’s dose of perspective comes as the mainstream media has been silent and uninterested in the ongoing accusations against Bill Clinton and Hillary’s attempts to silence his accusers.

But in the last 24 hours, they’ve reported ad nauseam about Trump’s 2005 locker room talk caught on a hot mic. 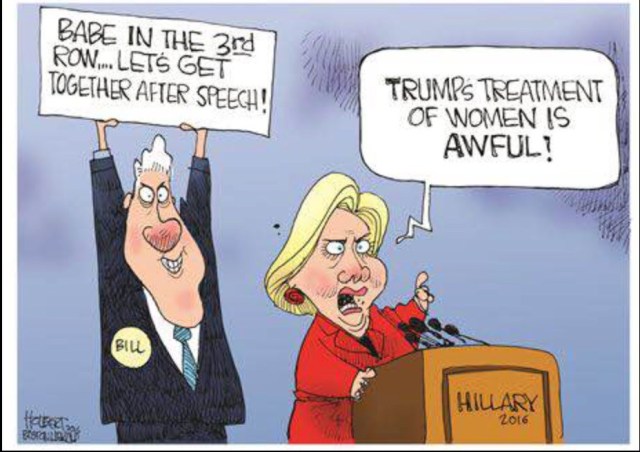 I agree with this statement in an article at Kingsjester’s Blog:

This has to be one of the biggest exercises in hypocrisy that I have ever seen.

Modern American Liberals are the same ones who brought us a crucifix in a jar of urine and a painting of Christ with elephant dung smeared all over it, applauding them both as avant-garde art and the “artists” who created those vile exhibits as “artistic geniuses”.

The same followers of the political philosophy who have been supporters  of relative morality and situational ethics, are now acting so grossly offended by an 11-year-old video of Donald J.Trump engaging in a private conversation with a friend, in which he used a word that can be heard in every men’s and boys’ locker room across this nation, that they are curled up in their safe spaces, clutching their pearls and their blankie, sucking their thumbs, and crying out for their Mommy to “make the bad man stop”. [Emphasis added.]

The overwhelming hypocrisy of it all is that they want Americans to be so reviled by Donald Trump’s use of that word that they overlook the documented fact that Bill Clinton is a Serial Adulterer and that Hillary Clinton swears like a drunken sailor and has admitted in documents released by Julian Assange yesterday that she is “far removed from the troubles of Middle Class Americans”. [Emphasis added.]

I stole this cartoon from that article, and it fits: 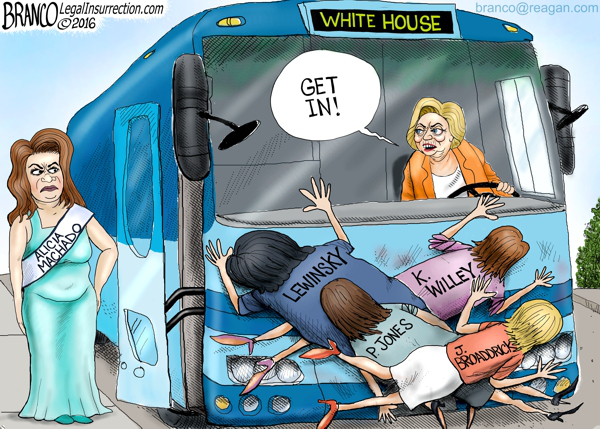 I also agree with this article at Canada Free Press titled Liberals are Prudes — Who Knew?

Recently much ado has been made of some crude comments that Donald Trump made some years back.  Media mavens are all aflutter with outraged disgust.  I do not know what convent these shocked sisters came from, but I have heard similar male braggadocio my entire adult life.  Perhaps they need to get out more. [Emphasis added.]

Apparently many of the pundits we watch on TV have been closet Puritans all this time – who knew?  Many of them are the same ones that informed us that displaying Christ crucified in a jar of human urine is art; that murdering fetuses in order to harvest their organs is not obscene, and who insist that our children be taught the ins and outs of fornication at younger and younger ages (pun noted)—so one can be forgiven for being somewhat surprised by their air of affronted prudery.  Poor dears, one does wish them a speedy recovery – hand out the smelling salts please.

So Donald Trump has feet of clay—guess what?  I like him that way! I am so sick of polished, slick talking, glad-handing, backstabbing, dishonest corrupt politicians that I could scream.  I’ll take the real deal—I’ll take Trump with his rough edges and sharp elbows, warts and all, over any of the oh-so-refined thoroughly corrupt bought-and-paid-for globalists being shoved down our throats.  Now they are disgusting.

Trump’s “nasty” talk was hardly unique. Here are some audio cuts of former presidents, and even the current president for whom Ms. Dunham thought voting for would be sexy, being “nasty:”

In one of his many addresses to his troops during World War II, General George Patton commented that “a man who won’t f**k won’t fight.” The quote is from a 2011 Washington Post article titled “No sex, please. We’re soldiers.” That address, like many of General Patton’s others, was well laced with profanity; it helped to motivate the troops and they loved it. Would today’s “metrosexuals?” They would not likely admit it even if they did.

Patton’s grim expression did not change. “There are four hundred neatly marked graves somewhere in Sicily”, he roared into the microphone, “All because one man went to sleep on the job”. He paused and the men grew silent. “But they are German graves, because we caught the bastard asleep before they did”. The General clutched the microphone tightly, his jaw out-thrust, and he continued, “An Army is a team. It lives, sleeps, eats, and fights as a team. This individual heroic stuff is pure horse shit. The bilious bastards who write that kind of stuff for the Saturday Evening Post don’t know any more about real fighting under fire than they know about fucking!”

The men slapped their legs and rolled in glee. This was Patton as the men had imagined him to be, and in rare form, too. He hadn’t let them down. He was all that he was cracked up to be, and more. He had IT!

“We have the finest food, the finest equipment, the best spirit, and the best men in the world”, Patton bellowed. He lowered his head and shook it pensively. Suddenly he snapped erect, faced the men belligerently and thundered, “Why, by God, I actually pity those poor sons-of-bitches we’re going up against. By God, I do”. The men clapped and howled delightedly. There would be many a barracks tale about the “Old Man’s” choice phrases. They would become part and parcel of Third Army’s history and they would become the bible of their slang.

He could, when necessary, open up with both barrels and let forth such blue-flamed phrases that they seemed almost eloquent in their delivery. When asked by his nephew about his profanity, Patton remarked, “When I want my men to remember something important, to really make it stick, I give it to them double dirty. It may not sound nice to some bunch of little old ladies at an afternoon tea party, but it helps my soldiers to remember. You can’t run an army without profanity; and it has to be eloquent profanity. An army without profanity couldn’t fight its way out of a piss-soaked paper bag.” [Emphasis added.]

I remember that many years ago (1959 or 1960) when I was in ROTC at Yale — then an all-male college — an instructor (an Army captain) mentioned that he hadn’t seen one of the cadets with his date much over the weekend. The cadet responded, “even the best ***** gets moldy.” We all laughed.

As late as the 1980s, officers’ clubs on military bases in the United States and abroad regularly featured performances by strippers. “I think we used to call them exotic dancers,” Scales recalled.

Some things have changed in our current enlightened age. Obama is gung-ho for diversity in the military and wants as many women and “others” as possible in combat branches. While the left still praises “art” such as “a crucifix in a jar of urine and a painting of Christ with elephant dung smeared all over it,” it finds guy talk and cartoons depicting Mohammad disgusting.

“I am sickened by what I heard today,” Ryan said. “Women are to be championed and revered, not objectified. I hope Mr. Trump treats this situation with the seriousness it deserves and works to demonstrate to the country that he has greater respect for women than this clip suggests.”

Congressman Ryan must be “sickened” quite easily, but then perhaps there was never any guy talk in his presence, lest he “sicken.” Assuming that many others also are unaware that men engage in guy talk when women are absent and find Trump’s insulting comments outrageous, perhaps they should keep in mind that he is an equal opportunity insulter. Although he does not likely engage in guy talk with women and does not have sex with men, otherwise he treats men and women the same.

Leftists insist that we be politically correct and say nothing that they find offensive  — No cartoons depicting Mohammad, no disparaging references to Sharia law, Islamist persecution of non-Muslims, sex slaves and even Muslim females, no “racist” comments that “Black Lives Matter” is racist, and no opposition to uncontrolled, unvetted immigration and resettlement of refugees from Islamic areas where Sharia law and Islamist violence are endemic. And, of course, there must be no mention of Hillary’s many lies, her corruption, the Clinton Foundation, or her foul treatment of Bill’s bimbos. That would be “sexist” or something. Boo hoo.