Posted on 13 December 2014 by danmillerinpanama

All the news that fits the desired narrative, and none other, shall be reported by the legitimate “news” media. 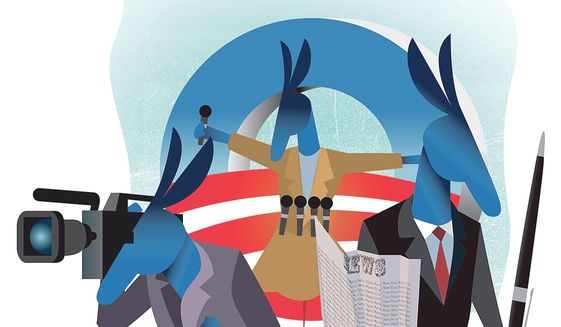 On February 11, 2013 Vice President Biden said that he and Obama are “counting on…legitimate news media” to help in their gun control efforts.

He said he knew people would continue to “misrepresent” the positions taken by himself and Obama, but that “legitimate news media” would cover them in a way that’s helpful to the administration.

In this post, I use the term “legitimate ‘news’ media” in the same sense that Biden apparently did.

I have been reading Sharyl Attkisson’s November 2014 book Stonewalled. Its thesis is that favored businesses, Government agencies and politicians set the agenda of the legitimate “news” media, which defer to them in what they report and how they report it.

Since Obama’s 2008 nomination and subsequent election, the legitimate “news” media have embraced Him by reporting (or creating) good news for Him and His administration while ignoring or disparaging any reports that they consider inconsistent with their pro- Obama ideological talking points. In doing so, they have relied excessively on administration spokespersons without verifying, independently, what they have been told.

On December 11th, The Washington Times published an article by Monica Crowley titled How do we protect Barack Obama today? It relates to the ideological perspective of the media as related by a broadcast journalist shortly before the 2012 presidential elections.

When I asked her for an example, she replied, “Every morning, we hold a meeting about how to build that evening’s broadcast. We’ve been doing this for decades. Everybody talks about which stories we’re going to air, what the line-up looks like, and which reporters we’ll have live in the field and which ones will be filing taped pieces. In the past, the left-wing bias was always left unspoken. People just ‘got it,’ because they all thought the same. [Emphasis added.]

“Once Obama pulled ahead of Hillary and certainly once he became president,” she said, “the bias came out of the closet. Now, every morning when we meet to discuss that night’s show, they literally say — out loud — ‘How do we protect Barack Obama today?’” [Emphasis added.]

Shocking? No more shocking than any other common but unpleasant reality. And it is congruent with Ms. Attkisson’s multiple accounts in Stonewalled. Less than half way through her book, I have learned more than I had previously understood about what, how and why the media reported — and did not report — on the green scam, the Benghazi scam, the Fast and Furious scam, the IRS scam and others. It’s disgusting but neither shocking nor surprising.

We have a “free press” in the legitimate “news” media. They are free to lie, to accept officially authorized “news” and to reject as not newsworthy or wrong anything which disputes, or is even merely inconsistent with, the prevailing narrative based on the official line.

Many viewers and readers of the legitimate “news” media seem to be catching on. Perhaps that explains the decline in their numbers of viewers and readers. Do the legitimate “news” media care? They must, because it impacts their bottom lines. Will they continue their march into oblivion by running ever more bland pap while hoping for change they can believe in? Or will they, eventually, begin to report hard news, regardless of whom it might distress?

Please read Stonewalled. Depending on where you live, it may (or may not) be available at your local public library.

I was graduated from Yale University in 1963 with a B.A. in economics and from the University of Virginia School of law, where I was the notes editor of the Virginia Law Review in 1966. Following four years of active duty with the Army JAG Corps, with two tours in Korea, I entered private practice in Washington, D.C. specializing in communications law. I retired in 1996 to sail with my wife, Jeanie, on our sailboat Namaste to and in the Caribbean. In 2002, we settled in the Republic of Panama and live in a very rural area up in the mountains. I have contributed to Pajamas Media and Pajamas Tatler. In addition to my own blog, Dan Miller in Panama, I an an editor of Warsclerotic and contribute to China Daily Mail when I have something to write about North Korea.
View all posts by danmillerinpanama →
This entry was posted in ABC News, Benghazi, Brain washing, CBS, CNN, Corruption, Democrats, Estblishment, Facts vs. leftist narrative, Federal Agencies, Free Press, Freedom, Gun control, Headlines, Ideology, Integrity, Leftists, Lies, Media, MSNBC, Obama, Obama Nation, Political class, Political Correctness, Politics, Propaganda, Reporting and tagged ABC, Benghazi, CBS, CNN, Corruption, Democrats, Establishment, Free press, Freedom, Gun control, Headlines, Ideology, Leftists, media, MSNBC, obama, Obama Nation, Political class, Political correctness, Propaganda, Reporting, Sharyl Attkisson. Bookmark the permalink.

4 Responses to The incestuous Government-Media-Business farce