Islam and the destruction of our culture: Obama and collective insanity

Posted on 17 January 2015 by danmillerinpanama

If “the collective we” were sane, we would exclude those who want to kill us and destroy our culture of freedom. 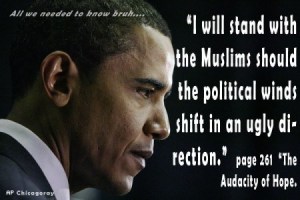 The basis of His foreign and some domestic policies

Geert Wilders explained the problem, quite well, to the Dutch parliament.

Where is our Geert Wilders? Why are those who want to eliminate, or even limit,  immigration by those who reject our cultural values deemed racist and/or “Islamophobic”? “Islamophobia” is the irrational fear of Islam, but the term is used to encompass all whose fear or dislike of Islam is rational. Are “the collective we” insane?

Obama does seem to be insane, but not because of any irrational fear of Islam. Perhaps He suffers from “freedomphobia” or “realityphobia.” He claims that Islamic terror is not Islamic, while recognizing that Islamic terrorists are Islamic. An article at American Thinker suggested that He is psychotic. It points out a few of the ways in which Obama has treated violent terrorists as Islamic, while maintaining that they are not.

If Obama didn’t consider Osama a faithful Muslim, why did he order the U.S. Navy to bury him at sea within 24 hours, according to Islamic law?

Why didn’t Obama order the Navy to unceremoniously slip bin Laden’s body into the water from the ship’s deck as some sort of generic extremist?

The administration actually hyped its considerable efforts to make sure that bin Laden’s burial complied with Islamic law. Obama’s White House counterterrorism adviser, John Brennan, claimed that bin Laden’s remains were buried “in strict conformance with Islamic precepts and practices.” Brennan said the administration consulted “appropriate specialists and experts” before making the decision,” according to the Washington Post. [Emphasis added.]

“The efforts that were made to give Osama bin Laden an appropriate burial, following Islamic precepts and traditions, were considerable.”

Why hasn’t Obama ordered the Marine commandant at Guantanamo Bay to stop providing an Islamic diet, prayer beads, prayer rugs, and Korans to prisoners affiliated with al Qaeda, ISIL and other terrorist groups if they’re not Islamic? This includes Khalid Shaikh Mohammed who admittedly decapitated American journalist Daniel Pearl and masterminded the 9/11 attacks on the United States.

The New York Post on June 30, 2013, published photos of the many choices of Halal foods offered to Gitmo inmates and quoted an unidentified official at Gitmo:

The official called Gitmo detainees ‘some of the most pampered prisoners on the planet.’ He said they get as many as four choices of halal meals and have access to a new $750,000 soccer field. Islamic prayer beads and rugs are now “standard issue.” They get their choice of more than 10,000 Islamic books and videos stocked by a Muslim librarian, who also records soccer and Arabic TV for them. They even have their own clerics to preach to them in Arabic.

Everyone gets a Koran, paperback or hardback, along with little hammocks to keep their holy book from touching the ground when not in use. Guards are prohibited from handling the books. The Muslim librarian is ‘the only one that’s allowed to touch the Korans anymore, per detainee request,’ the official said. ‘If I went into the Koran room and started rifling through a Koran, I could be fired.’ But no one gets a Bible, because the Bible could ‘incite’ the terrorists.

USA Today published a similar article, “Muslim Holy Period to Be Celebrated at Guantanamo,” on Aug. 7, 2013:

The military planned to serve lamb, bread, dates and honey as the last daylight fasting period of Ramadan ends, followed by three traditional holiday dinners on Thursday, said a spokesman for the prison, Navy Capt. Robert Durand. There will also be a special hour-long prayer for the holiday known as Eid al-Fitr in addition to the five daily prayers.

If, as Obama continues to tell us, the Islamic State and other Islamic terror groups are “not Islamic,” how about the Islamic nations we recognize and/or negotiate with, including Saudi Arabia and Iran? Their efforts to eliminate all critical examination of Islam — by Muslims as well as by non-Muslims — along with their human rights records in general, fit quite well with those of “non-Islamic” Islamic terror groups.

A Washington Post opinion piece titled Meet the honor brigade, an organized campaign to silence debate on Islam argues, correctly in my view, that Islam as now practiced poses existential dangers to and otherwise inhibits the few actually moderate Muslims who are working for gradual change. In republishing the article at Warsclerotic, I added this parenthetical comment:

(It’s encouraging to read that a few actually moderate Muslims are slowly bringing modest changes to a few who practice the Religion of the Perpetually Offended and Violent. However, much more and a long time will be needed before significant numbers of “moderate” and “non-extremist” Muslims begin to accept freedoms for themselves and for others and to reject Sharia law in its present and historic form.  Until then?– DM)

The author’s proposed changes, for example in the ways that women are treated in mosques, have been condemned. She contends broadly that

we need a new interpretation of Islamic law in order to change the culture. This would require rejecting the eight schools of religious thought that dominate the Sunni and Shiite Muslim world. I propose naming a new one after ijtihad, the concept of critical thinking, and elevating self-examination over toxic shame-based discourse, laws and rules. [Emphasis added.]

What would be left of Islam were that to happen?

She and many others have been deemed “Islamophobes,” and an “honor brigade” has been formed to combat “Islamophobia.”

The official and unofficial channels work in tandem, harassing, threatening and battling introspective Muslims and non-Muslims everywhere. They bank on an important truth: Islam, as practiced from Malaysia to Morocco, is a shame-based, patriarchal culture that values honor and face-saving from the family to the public square. Which is why the bullying often works to silence critics of Islamic extremism. [Emphasis added.]

“Honor brigades are wound collectors. They are couch jihadis,” Joe Navarro, a former supervisory special agent in the FBI’s behavioral analysis unit, tells me. “They sit around and collect the wounds and injustices inflicted against them to justify what they are doing. Tragedy unites for the moment, but hatred unites for longer.”

The campaign began, at least in its modern form, 10 years ago in Mecca, Saudi Arabia, when the Organization of Islamic Cooperation — a mini-United Nations comprising the world’s 56 countries with large Muslim populations, plus the Palestinian Authority — tasked then-Secretary General Ekmeleddin Ihsanoglu with combating Islamophobia and projecting the “true values of Islam.” During the past decade, a loose honor brigade has sprung up, in part funded and supported by the OIC through annual conferences, reports and communiques. It’s made up of politicians, diplomats, writers, academics, bloggers and activists. [Emphasis added.]

In 2007, as part of this playbook, the OIC launched the Islamophobia Observatory, a watchdog group based in Jiddah, Saudi Arabia, with the goal of documenting slights against the faith. Its first report, released the following year, complained that the artists and publishers of controversial Danish cartoons depicting the prophet Muhammad were defiling “sacred symbols of Islam . . . in an insulting, offensive and contemptuous manner.” The honor brigade began calling out academics, writers and others, including former New York police commissioner Ray Kelly and administrators at a Catholic school in Britain that turned away a mother who wouldn’t remove her face veil.

“The OIC invented the anti-‘Islamophobia’ movement,” says Zuhdi Jasser, president of the American Islamic Forum for Democracy and a frequent target of the honor brigade. “These countries . . . think they own the Muslim community and all interpretations of Islam.”

Alongside the honor brigade’s official channel, a community of self-styled blasphemy police — from anonymous blogs such as LoonWatch.com and Ikhras.com to a large and disparate cast of social-media activists — arose and began trying to control the debate on Islam. This wider corps throws the label of “Islamophobe” on pundits, journalists and others who dare to talk about extremist ideology in the religion. Their targets are as large as Israeli Prime Minister Benjamin Netanyahu and as small as me.

The official and unofficial channels work in tandem, harassing, threatening and battling introspective Muslims and non-Muslims everywhere. They bank on an important truth: Islam, as practiced from Malaysia to Morocco, is a shame-based, patriarchal culture that values honor and face-saving from the family to the public square. Which is why the bullying often works to silence critics of Islamic extremism. [Emphasis added.]

Is Obama an honorary member of the OIC  and/or a “honor brigade”? He might as well be. Please see my articles, Obama plans to restrain media offensiveness to Islam and A thought experiment about Islam.

Geert Wilders, whose fears and concerns about Islam are manifestly rational, is no “Islamophobe.” He is one of the few politicians who recognize the dangers of Islam to the lives and freedoms of all who are not Muslim, as well as of some who are. If and until Islam some fine day becomes moderate and non-extremist — as Obama et al tell us it now is — we need many more like Mr. Wilders.

6 Responses to Islam and the destruction of our culture: Obama and collective insanity