Posted on 20 August 2015 by danmillerinpanama

In an exclusive interview with the FARtz News Agency, President Obama today voiced firm support for any deal bewteen Iran and the International Atomic Energy Agency permitting Iran to know for sure what it hasn’t been doing at its alleged military sites.

Editor’s note: This is a guest post by my (imaginary) colleague, the Very Honorable Ima Librul, Senator from the great State of  Utopia. He is a founding member of CCCEB (Climate Change Causes Everything Bad), a charter member of President Obama’s Go For it Team, a senior member of the Senate Foreign Relations Committee and Chairman of the Meretricious Relations Subcommittee. He is also justly proud of his expertise in the care and breeding of green unicorns, for which his Save the Unicorns Foundation has received substantial Federal grants. We are honored to have a post of this caliber by a quintessential Librul such as the Senator.

Secretary Kerry and I are both delighted with any deal between the International Atomic Energy Agency and Iranian officials which helps Iran to become more introspective. Introspection is good for the soul and I Myself engage in it often to help Me understand the very few instances in which I may have made mistakes and to atone for them. Almost always, I discover that I was right in the first place and wrong in even considering the possibility that I might have been wrong.

If in the past Iran mistakenly declared that it had never attempted research and development of nuclear weapons, its own inspection of Parchin and other alleged military sites should be instrumental in discovering its mistake and advising the World. For example, many years ago Iranianian scientists may have rubbed two pieces of Uranium ore together and, upon discovering that they did not explode, given up all hope of ever trying to develop nuclear weapons. My administration and Iran’s other friends need to know. Then we can put aside any and all lingering doubts about Iran’s exclusively peaceful nuclear program. 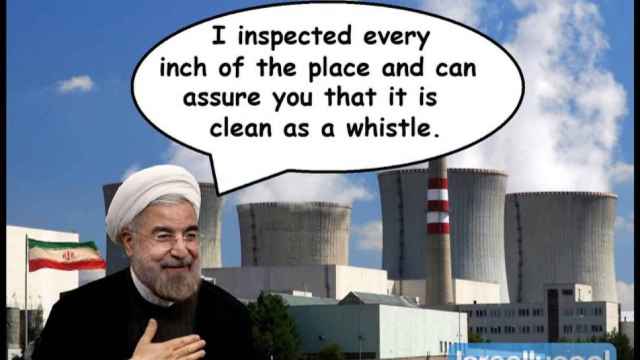 Iran’s Tasnim News Agency praised His enlightened understanding of the possibility of human error and, indeed, even His own. “Talking with President Obama is a humbling experience!” The often unfairly critical New York Times Editorial Board offered similar praise for Obama’s charming candor and His recognition that even Iran’s allegedly Mad Mullahs are as reasonable as He Himself is. It suggested that Obama follow up on His interview by issuing an Executive Decree pursuant to which

a committee selected by Iran’s Supreme Leader shall have sole authority to determine which, if any, remaining sanctions will be lifted, when, and whether any possibility of their reimposition — or the reimposition of previously removed sanctions —  will be permitted.

Obama’s deputy under secretary for press relations stated that Obama had immediately set to work crafting such a decree.

Only one Israeli newspaper, an infrequently read far right-wing scandal sheet favored by Prime Minister Netanyahu’s wife, had an adverse and therefor obviously racist headline: “IT’S A DARK DAY FOR AMERICA!” Less blatantly right wing Israeli media, such as Haaretz, immediately condemned the story in an article headlined “AS ALWAYS, OBAMA DOES THE RIGHT THING AGAIN.”

Whether Iran knows what it’s not been doing is less important than the U.S. Congress knowing what it has been doing. I therefore demand that House Speaker Boehner go immediately to Iran to investigate the Parchin military facility and stay there until he finds out what’s been happening. [Emphasis added.]

Speaker Boehner declined the invitation, lamenting that his miniscule budget does not permit him to acquire any possibly necessary anti-radiation clothing. He did, however, offer tearful thinks to Senator Krutz for the confidence he had placed in his ability and scientific knowledge.

It is indeed a sad day for America when even a right-wing Israeli paper such as Haaretz is less critical of our Dear President than some tratorious, racist Republicans such as Senator Krutz. President Obama, a very sensitive and loving person, needs our unstinting help. In this, His time of need, we must all stand behind Him as He battles the forces of oppression, ignorance and racism sadly still rampant in the U.S. Congress.